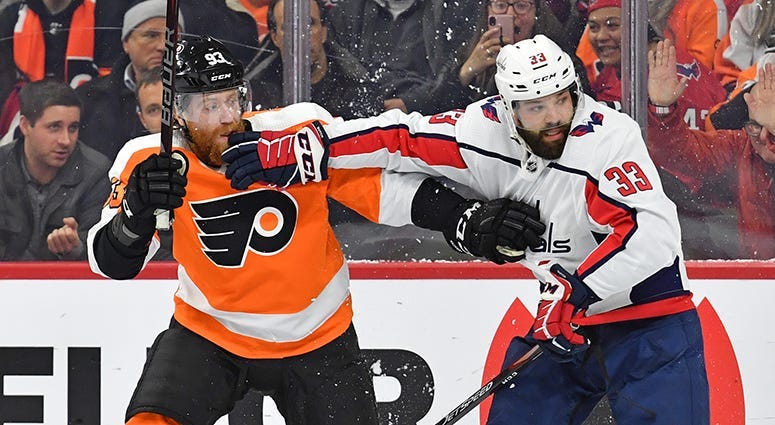 Capitals defenseman Radko Gudas plays the type of physical hockey that isn't likely to gain him many fans around the league.

It's the brand of hockey that got to where he is eight years into his NHL career, which is why he can't imagine changing now.

"I made it in this league playing hard, physical hockey, so I don't see a reason why to getting away from that," Gudas told 106.7 The Fan's Grant Paulsen and Danny Rouhier Wednesday, presented by F.H. Furr.

"Obviously the opposite team, they're not gonna like me," he said. "But I'm more worried about what my team and what my fanbase does. I'm happy that I'm on a team that has a winning mentality, and then there's more than just me that's playing this style. We have a lot of guys on this team that like to play the physical game and that are really good at it, too, so it's been nothing but fun so far."

Asked if he takes pride in making opposing fanbases hate him, Gudas said, "I like when the people like me, but I also like that some people don't."

"There's rivalries between organizations and teams, and I think that's part of the sport too," he said. "All the small things are with it that I do enjoy. I do enjoy being the guy that people hate on the other team, but I also enjoy being the guy that the people like, that are fans of the team that I play for. It's a little mixed feeling, but I'm trying to embrace it as much as I can."

While Gudas is often public enemy number one with opponents, he's equally beloved for his style of play by Capitals teammates. The latter part, Gudas says, is the top priority.

Gudas arrived in Washington via trade in June, with former Caps defenseman Matt Niskanen going to the Flyers. His first 25 games here have yielded one of the greatest 25-game stretches in Capitals history.

Asked if he's surprised at how hot they've started, Gudas replied, "No, that's great news obviously. I'm obviously a little surprised with the winning percentage and the success, but on the other hand, this team is working hard and this team, every time we're on the ice, we're trying to get better and we're pushing for things that we know is going to help us."

"I think a lot of it was the preparation of the coaches and organization, the fact that they had a longer summer than they wanted," he said. "I think the guys came ready and took the ownership of starting the season on the right note. I think it's been working for us well and I'm glad the fans were loving the start of our season, and so are we, frankly."

Gudas starts at the 16-minute mark below.