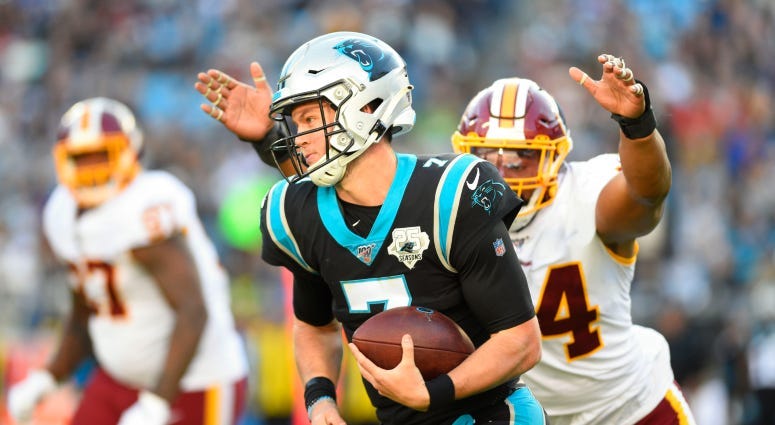 The Redskins needed to add a quarterback to compete with, or at the very least, back up second-year passer Dwayne Haskins.

They found one in Carolina, acquiring quarterback Kyle Allen in a trade with the Panthers on Monday, multiple outlets are reporting.

Traded! The #Panthers sending QB Kyle Allen to the #Redskins, per source.

The Redskins are giving up a fifth-round pick in the deal.

With Dwayne Haskins having the best chance to be the starter (pending the draft), Kyle Allen comes in as the backup at the least. A QB that coach Ron Rivera has a lot of trust in. https://t.co/DX69kS8zbz

Can confirm Redskins traded for Kyle Allen. He's the right level backup to come in and compete with Dwayne Haskins. Side by side look at their 2019 seasons attached. Allen had more starts. pic.twitter.com/33dV47axSf

Kyle Allen is currently on a one-year deal and is still just 24 years old. Reunites with his former OC Scott Turner as well. https://t.co/nnoy0rbH4U

It was Allen who helped the Redskins to one of their three wins in 2019, fumbling the ball on fourth down with Carolina at Washington's three-yard line, trailing by just eight points with 27 seconds left in regulation. Coincidentally enough, that Panthers loss also got Ron Rivera fired after nine seasons coaching in Carolina.

It all comes full circle now, with Rivera acquiring Allen in his first season as Redskins head coach.

Biggest reason this was a mistake. Rebuilding teams should be in the business of adding picks, not trading them away. Some will return w/Trent and or Dunbar but not enough. He can know the system for a bad team. https://t.co/TxUPoem09E