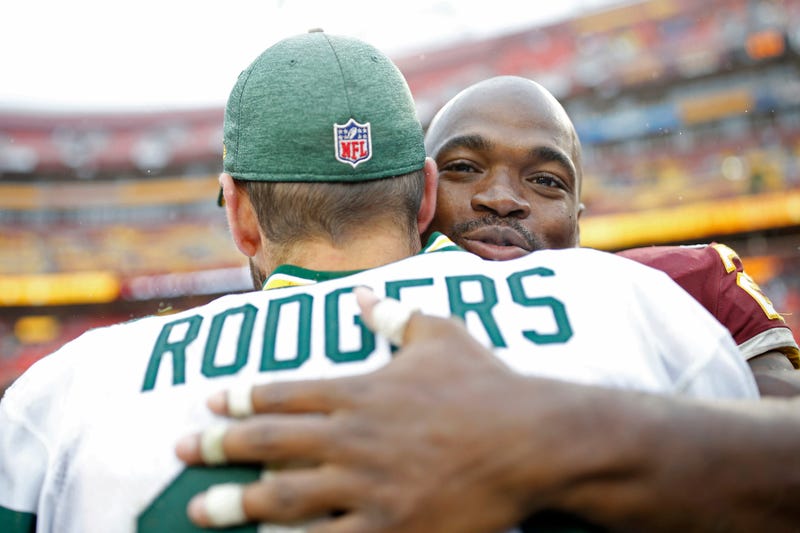 Adrian Peterson's at his best playing against the Packers, recording more rushing yards and touchdowns against Green Bay in his career than any other team.

"If I had to put my finger on one thing, it would be Aaron Rodgers," Peterson said during an appearance on Chad Dukes Vs. The World Monday when asked why he plays so well against the Packers. "It's like, the best way to defend against Aaron Rodgers is have him on the bench."

"I've always went into the mindset when we played Green Bay, we need to make sure we establish the run game so we can keep them on the sideline and just create some long drives. Five, six minute drives to limit his opportunities. Because if you give him plenty of opportunities, he's gonna capitalize, and when he's capitalizing, that's a W for Green Bay."

Peterson certainly established the run game in Washington's Week 3 victory over Rodgers and Green Bay, rushing for 120 yards and two touchdowns on 19 carries. But he also gave credit to the Redskins defense, which held the Packers offense to just 17 points.

"Defensively, these guys have played outstanding. I don't think they got enough credit last week against Green Bay, what those guys were able to do, especially in that second half." Peterson told Dukes. "To keep Green Bay and Aaron Rodgers out of the end zone, hats off to those guys."

"It was good to get that test to see how we were going to respond to adversity (after losing in Week 2), and I feel like everyone stepped up and did their job. ... I think the sky's the limit."