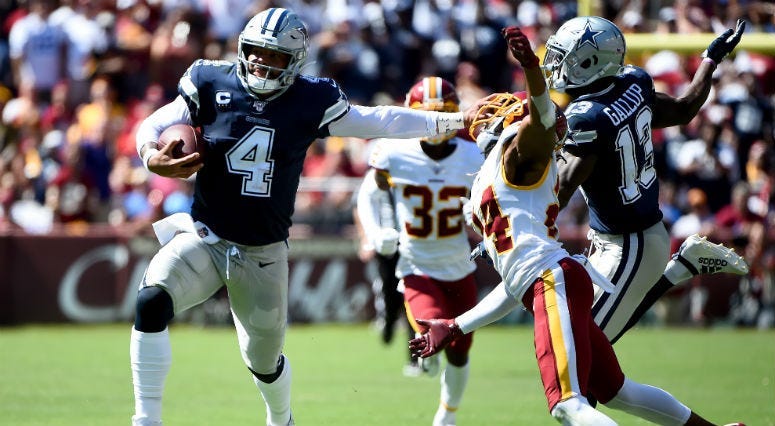 Photo credit Will Newton/Getty Images
By Craig Hoffman 106.7 The Fan

The Redskins are supposed to be a team built around their defense and running the bull. In each of their first two games, their featured back has failed to rush for more than 25 yards and their defense has given up at least 30 points.

"I know my guys. I know how we play," Landon Collins said after the game. "I know we're better than that, what we put on the field."

The problem is they've played two games and they haven't been. This, so far, is their resume.

The Cowboys offense started slowly and the Redskins even forced their first turnover of the year in the first quarter. They punted again on their next drive. Then the floodgates opened. Dallas scored on its next six drives, including every drive in the second half except the last one, where they completed their mission of running out the clock and ending the game.

The problems were everywhere. Ezekiel Elliott couldn't be stopped when the Redskins needed to stop him. He finished with 23 carries for 111 yards and a touchdown. Dak Prescott had a field day, missing the mark on only four passes. He was 26-for-30 for 269 yards and three scores. He also had 69 yards rushing, many in crucial situations.

"There are no excuses to be had. We have to look at ourselves, and we have to play better," Jay Gruden said following the 31-21 loss about his defense. "We're minus a couple of pieces in the secondary and that's an issue, but we really should be better than this."

In reality, the secondary gave up one big play and a bunch of smaller stuff. Josh Norman wasn't incorrect in saying that minus the one long touchdown, they'd have only given up about 220 yards to Prescott through the air. The Cowboys' scoring drives were methodical – 11, 9, 11 and 10 plays, respectively. But they gave up the big play and couldn't get off the field on third down.

"Once we get our guys back, I'll feel a little bit better about the secondary," Gruden said. "Now the defensive line, linebackers – we can't give up 200 yards rushing to anybody, any time, any place, anywhere. So that's something we really, really have to hone in on."

It's hard to know without watching the tape exactly where the blame should go. Gruden's also correct that his team has played two really good offenses with two of the best offensive lines in the league.

The obvious counterpoint is: Who cares? Those things are fair to point out in terms of analysis and credit should be given to the Eagles and the Cowboys for playing well, but the Redskins haven't given themselves a chance. The penalties have been too much to overcome and Gruden seems hopeless in correcting them.

"Every coach in this league teaches fundamental football – hand usage, knowing the snap count," Gruden said. "Eventually we're going to have to execute a little bit better and make sure we understand that we're being watched very closely."

So what changes? Other coaches get better results in those areas. The level of competition certainly won't change. The Bears' offense isn't as good as the two they've just faced, but their defense is filthy and Khalil Mack is coming for Morgan Moses, whose season is off to more than a rough start.

"We have a talented group on defense, and we're not reaching them," Gruden said in what is a pretty self-damning quote about he and his staff. "We have to play better and we will play better. We have 14 games left and a lot of football to play."

Gruden is right that it's early. Two games feels like a lot more season than it has been, but this feels different than other rough spots this organization has had under his tenure. This feels tenuous. This feels chaotic. This feels out of control.

It has felt that way from the far outside before, but whatever ring those of us who cover the team every day have been in have always pushed back. No one is pushing back now except the team and staff themselves. The good news is they haven't broken publicly. But there's no telling how much longer that lasts.

If it doesn't change, there will be changes. There would have to be. What won't change is the task at hand.

Quote of the day: "It's just a few plays here and there and that's the NFL. That's why everybody is so good in this league. That's why we grind out every play during practice and the game, because you never know which one is going to be the difference in the game." – Case Keenum, who, again, was on the wrong side of a better team making more plays.
Stat of the day: The Redskins have played turnover-free football through two games. They are 0-2.
Follow @CraigHoffman for more Redskins insights