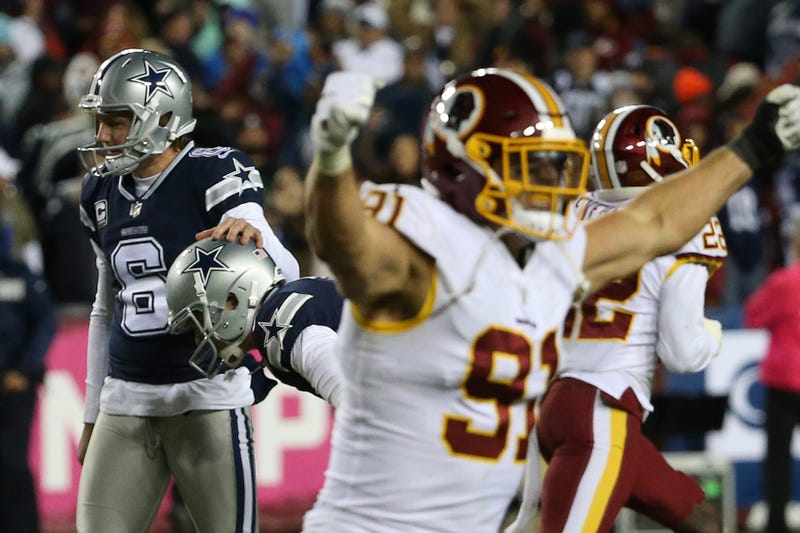 Nothing is ever easy for the Washington Redskins. But for once, they weren't the ones walking away from a loss muttering over bad luck.

After dominating the Dallas Cowboys for much of the game on Sunday for a 20-10 lead with 4:55 remaining, the Redskins let the visitors come back. It was soon 20-17 with 1:37 left. No problem, Washington simply needed a couple first downs. Instead, the Redskins couldn't get one, and even worse, quarterback Alex Smith went out of bounds to stop the clock.

Oh, you could smell overtime coming. And probably a loss after that. After all, that has been the Redskins' way for the past quarter century.

Dallas worked efficiently downfield to try a 47-yarder to tie the game in the final seconds. And then the Cowboys choked twice. A snap infraction penalty, so rarely ever heard that Cowboys coach Jason Garrett could only remember two over his career, cost Dallas five yards. And then, Cowboys kicker Brett Maher bounced the 52-yard kick off the left upright.

The split silence of the 60,000-plus crowd that was a good 40 percent Cowboys fans was suddenly shattered by the mixed cheers and groans. It was over and Washington for once was walking away smiling.

Sometimes, it's better to be lucky than good.

Washington (4-2) is in first place nearly midway through the season. In fact, they're 1.5 games up in a crummy NFC East where defending Super Bowl champion Philadelphia is just 3-4 after blowing a 17-0 lead on Sunday in a 21-17 loss to Carolina. Dallas is 3-4 while the New York Giants are 1-5.

Maybe the Redskins aren't a great team, but they've shown to be survivors. The defense is pretty good. Special teams have been good. The offense has been good enough not to lose games. After all, you can't have everything work well.

But Redskins coach Jay Gruden finally walked away with his first home victory over Dallas in five tries. Adrian Peterson and Smith won in their rivalry debuts. They saw the wonders of the rivalry in the crowd where it was so loud before the final kick that Ryan Kerrigan couldn't hear anything else.

Finally, Washington got a break. The question is whether it's that type of season that can result in an unexpected playoff run.

It's going to be close.