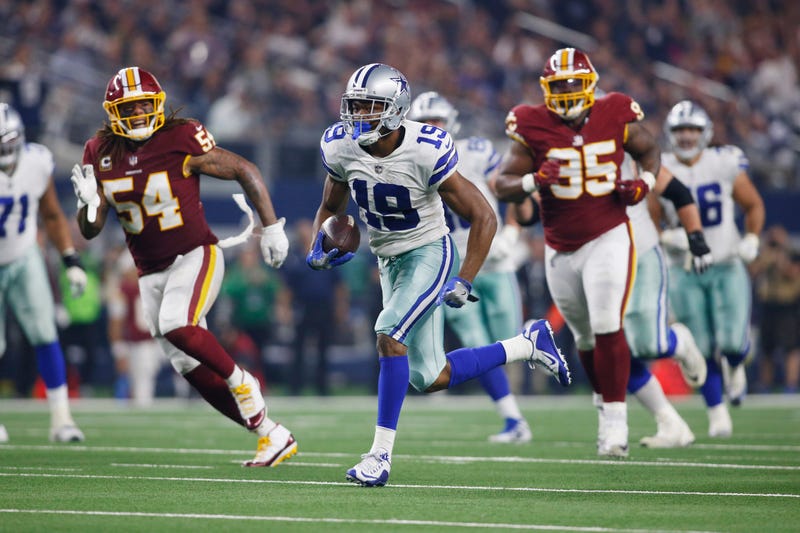 It is going to be an insufferable next 10 days or so until the Redskins play again on Monday Night Football against the struggling Philadelphia Eagles.

Not only because they lost for a second time in less than five full days, 31-23 to the Dallas Cowboys, but because Redskins fans, players and coaches are simply furious at the horrendous officiating which was on full display at AT&T Stadium in Arlington on Thanksgiving.

Make no mistake: the Redskins did not lose just because or primarily as a result of four or five badly missed calls and a couple of questionable calls against them that certainly could have not been called. But the horrendous officiating on Thursday afternoon was the stuffing, gravy and mashed potatoes to the turkey that the Cowboys offense carved up on a platter.

A quick run-down of missed calls that I noticed goes like this: A blatant missed helmet-to-helmet hit on Jordan Reed. A clear as day missed face mask penalty against Dallas on Colt McCoy. Also, a late hit by Maliek Collins on McCoy that went unflagged. A clear holding call that wasn't made on Colt McCoy's third interception, a pass intended for Maurice Harris.

Questionable or shaky calls included a borderline at best holding call on Morgan Moses on a third down pass and a holding call against Fabian Moreau as the Redskins made a third-down stop in the fourth quarter, while trying to mount a comeback.

Offense - D Minus: The Redskins could not run the ball effectively when they needed to, despite having occasional success.

Colt McCoy made a couple of fantastic throws, including a long touchdown strike to a wide-open Vernon Davis and dialed up a red-zone score to Trey Quinn, but three killer interceptions were a dagger blow to a team with minimal margin for error.

McCoy was fortunate to not have another turnover on the first Redskins drive of the game, when he was sacked and fumbled, but Washington recovered.

They lacked any kind of urgency down the stretch, as usual, and somehow decided it was a good idea to pass three times and come up empty on all three plays to kill off only 19 seconds of clock and provide the Cowboys with a golden opportunity at the end of the first half. This was after the defense was on the field for a 14-play drive and 5:36 of game clock.

Defense – D: I could have gone lower here, but four sacks and several big defensive stops made up for some horrendous play at other times.

Washington didn't force any turnovers (a very bad sign) and allowed two long touchdown catch-and-run plays to Amari Cooper for 90 yards and 40 yards each. Dak Prescott passed for 289 yards (258 net) while the Cowboys came in averaging less than 200 net passing yards per game.

The Cowboys went through Washington's defense like they were in a tryptophan coma on the first series of the game for an easy score, and when Greg Manusky’s defense desperately needed to force a field goal instead of allowing another touchdown, they had Dak Prescott wrapped up twice well behind the line of scrimmage only to allow him to escape and run for a five-yard touchdown.

Special Teams – B +: This would have been an “A” grade if Dustin Hopkins did not miss an extra point attempt after Quinn’s touchdown catch.

Quinn set up his score with an electrifying 30-yard punt return up the sideline. Danny Johnson set up the final Redskins touchdown with a huge kick return of 44 yards.

Tress Way was as usual very good with five punts for a 45.6 average including one downed inside the five-yard line. He had four punts total downed inside-the-20.

Coaching – C: Life is unfair. Jay Gruden and his team had little time to prepare with a backup quarterback and had travel on a short week. The Redskins often play an undisciplined brand of football, which puts them in a tough position.

Gruden isn't as creative as other top-flight play-callers, but he also doesn't have the horses. He gets his team to play hard just about every week. They're just not good enough, ever. They also lack tempo and a sense of urgency when trailing, seemingly all the time.

Greg Manusky tried blitzing and pressuring at times off the edge and his defense got gashed for big inside runs a couple of times off of these pressures. They are also woefully inconsistent at tackling and taking proper angles, and both problems hurt them on the Cooper touchdowns.

Ben Kotwica's special teams continue to impress. As we've said before anyone, they have consistently been the best unit on this team week after week.
Follow Chris Russell on Twitter.