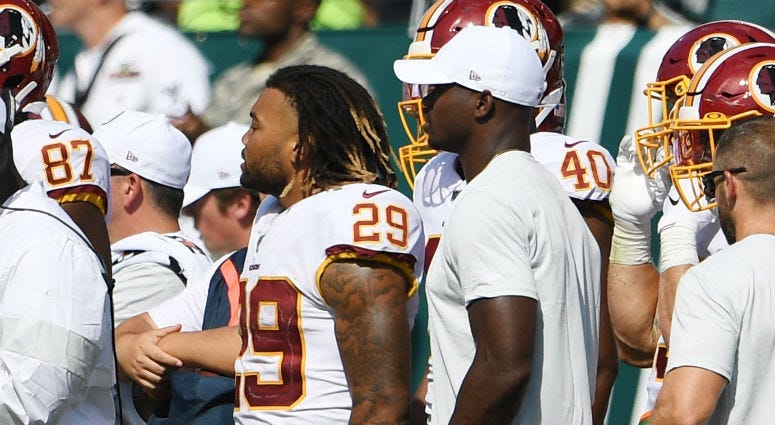 Turns out all the drama over Adrian Peterson not playing in the season-opening loss was for naught. With Derrius Guice once again hurt, Peterson looks to play against Dallas on Sunday. And, odds are he won't give the job back easily.
Redskins coach Jay Gruden making Peterson inactive at Philadelphia on Sunday has been harshly second-guessed, by fans down to offensive tackle Morgan Moses, who is still ducking yellow flags himself. Gruden further inflamed fans by essentially saying afterwards there was little chance Peterson plays this season aside Guice getting hurt.
Conspiracy theories flew. Twitter was filled with flaming pitchforks. Redskins fans were ready to die on the hill for Peterson in somehow feeling the future Pro Football Hall of Famer will enter as a Redskin despite only one season in Washington.
Ironically, this is not the team's biggest worry. Jonathan Allen's sprained knee is a big concern. The defensive play calling is a bigger concern. And figuring out why Moses keeps getting called for holding to kill drives is a major concern.
MORE: Moss, Portis slam Gruden over Peterson decision
Peterson-Guice is not a soap opera. Nor is it surprising. Peterson signed last season as Guice's one-year replacement. Peterson re-signed fully knowing the Redskins want the newcomer to be the prime back. But, Peterson is a pro and figured if he worked hard that his resume commanded playing regularly.
That break came on Monday when the Redskins confirmed reports Guice injured his non-ACL knee in the loss at Philadelphia. Something seemed wrong when Guice couldn't crack the line and gained only 18 yards on 10 carries. Granted, the running lanes were flooded with Eagles, but Guice needed to find some more yards there. Gruden was uncertain over the severity of Guice's injury, even declining to say if the latter plays on Sunday. Meanwhile, Peterson is ready.
Peterson has been a professional since arriving at Redskins Park 13 months ago. Teammates often watch the legend during practices because he sets a high standard and will enter Canton in his first year of eligibility. It stings to watch an aging veteran slip away, despite such things happening all the time. Indeed, few legends retire as starters.
Peterson has a chance to let Guice rest again for a while by leading this offense. At worst, he can earn a share of the job once Guice is healthy.
For now, the drama is sidestepped. But don't worry, there will be more later. It's Redskins Park, after all.
Rick Snider has covered Washington sports since 1978. Follow him on Twitter: @Snide_Remarks