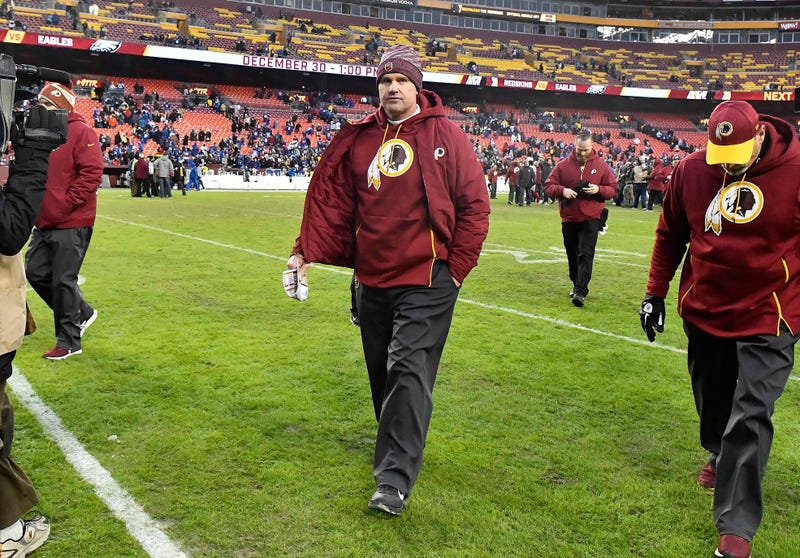 By Craig Hoffman
Eric Bickel cited a source this morning on The Sports Junkies who said Jay Gruden is frustrated with how things are going at Redskins Park. "He's super frustrated, (team president) Bruce (Allen) is calling all the shots. They're not consulting Jay at all. As of Friday, Jay was like, 'We have so many needs. We need linebackers, we need outside receivers, we have all these (needs).' And they had basically signed a backup quarterback (Case Keenum) and Landon Collins. That's about what they had done so far in free agency."
After another non-playoff year, Gruden was and is unquestionably frustrated. Gruden is a coach on the hot seat, and he knows it. His entire staff knows their seats are hot as well. They also know they need to get better because the roster they have is not good enough to compete for a championship. That is especially true on offense, where Gruden lost his best player in his weakest position group when Jamison Crowder signed with the Jets.
However, Gruden has been involved in the free agency process. The team has meetings starting immediately after the season extending into the final days and hours before free agency. Gruden was in those meetings, helping to set the Redskins free agency board. Sources with knowledge of Gruden’s thinking said that he was very high on Landon Collins, who the Redskins inked to a 6-year, $84 million contract within hours of free agency starting, and that the coach liked the addition of Case Keenum to compete with Colt McCoy.

While Gruden’s football opinion matters quite a bit and he absolutely is involved in the process, he is still the head coach and not the general manager, or the person in the general manager’s role as the Redskins do not employ someone with that title. Allen and Senior Vice President of Football Operations Eric Schaffer are in charge of contracts and ultimately play the biggest role in who the team signs. Even if a player was hypothetically the top target on Washington’s board, ultimately Allen and Schaffer put a price tag on that player’s value. If a player chooses elsewhere because of a better contract, that could be a role in Gruden’s cited frustration if he thought the team could have been more aggressive.

Gruden expressed frustration at his season ending press conference with the communication between the coaching staff and personnel departments. The Redskins had to add an inordinate amount of players during the season thanks to a borderline unbelievable amount of injuries for the second straight season. Gruden made it clear he wasn’t thrilled with how that process was handled.

“There’s a lot of things that probably need to change,” Gruden said on New Year’s Eve. “But moving forward we just all have to be on the same page as far as personnel, coaching and all that stuff. We have a good communication system in place right now but with all the injuries we’ve had it’s just hard to gauge ‘would we have been better with this guy in here and all our healthy guys?’ It’s just hard to gauge.”

“We adjusted pretty well I thought as a staff,” Gruden continued. “We tried to get as many guys ready to play as we could. Some young guys off the street on a Tuesday that started on Sunday in the National Football League isn’t easy to do. So I think staff wise we did some good things obviously, but not good enough. So that evaluation process - I’ll have to do a lot of listening first, if I’m still here, to see what they see. What their vision is. Then I have to adapt to what they see and try to do the best I can to make it work.”

In nearly every conversation with Gruden the injuries seem to be his greatest source of frustration. Losing multiple Pro Bowl players and multiple quarterbacks will do that to a coach. However it remains to be uncovered if the processes that Gruden touched on after the season changed and if those changes happened, if they will lead to better results.

What we know now is the coach certainly has a say in what goes on with the roster he ultimately will lead on the field in 2019, even if it’s not the “final” say. Allen has always defaulted to a position that the groups come together and make “Redskins decisions.” That position and that process will certainly be questioned when he speaks at the NFL Owners Meetings next week.