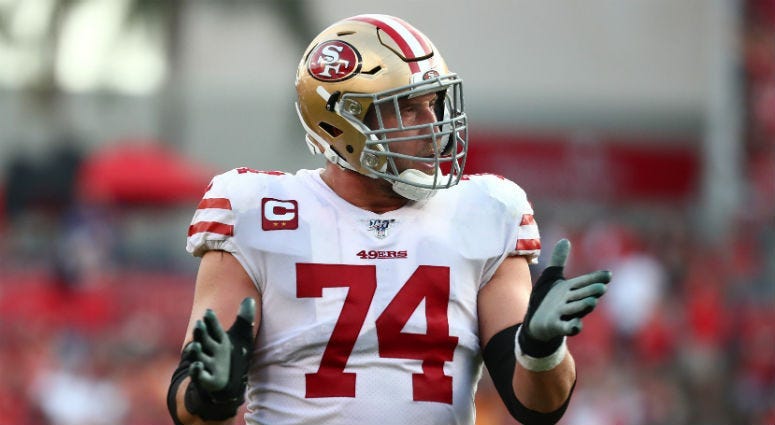 End this machismo standoff where neither side will budge. After Williams recently posted a photo of he and friends standing by a plane somewhere out west, there's no reason to believe he'll return. That photo was essentially a postcard from the edge saying, "Having a wonderful time. Glad I'm not there. Ha ha and, oh yeah, ha ha!"

The Redskins have also dug in, not wanting to set a precedent of redoing a player's contract or looking like they caved. That's fine to a point, but that line in the sand shifted on Sunday when San Francisco lost six-time Pro Bowl left tackle Joe Staley and New England lost left tackle Isaiah Wynn to injuries. Staley will miss at least eight weeks, while Wynn's return from turf toe is uncertain, though that injury can linger indefinitely.

This is the perfect scenario – two teams with playoff hopes desperate for help. Pit them against each other. Try for a first-rounder or at least a second when realistically Williams is only worth a second at best. The Patriots' first is practically a second-rounder anyway given they annually pick at draft's end.

Maybe have San Francisco throw in Jeff Wilson, a second-year running back with potential. The Redskins need to develop a 2020 Plan B, when Adrian Peterson probably doesn't return and Derrius Guice is still suspect because of two injuries in two seasons.

Surely Redskins president Bruce Allen can joke with San Francisco coach Kyle Shanahan, that firing the latter wasn't personal in 2014. Hey, Washington was just preparing the former assistant coach for bigger things in San Francisco. Best thing that could have happened to him, ha ha. That Bruce, always a kidder.

Let Williams be someone else's problem and use the picks to bolster next year's draft, when the first-rounder will probably be a left tackle. Meanwhile, Donald Penn appears a decent successor for a year.

Bottom line – Williams is not the difference in whether Washington makes the playoffs. But, he might be for San Francisco or New England.

The Redskins need to get off their high horse, make the call and try to reverse a franchise that looked horrible in an 0-2 start. That is, if they ever want home-field advantage in the stands anytime soon.
Rick Snider has covered Washington sports since 1978. Follow him on Twitter: @Snide_Remarks