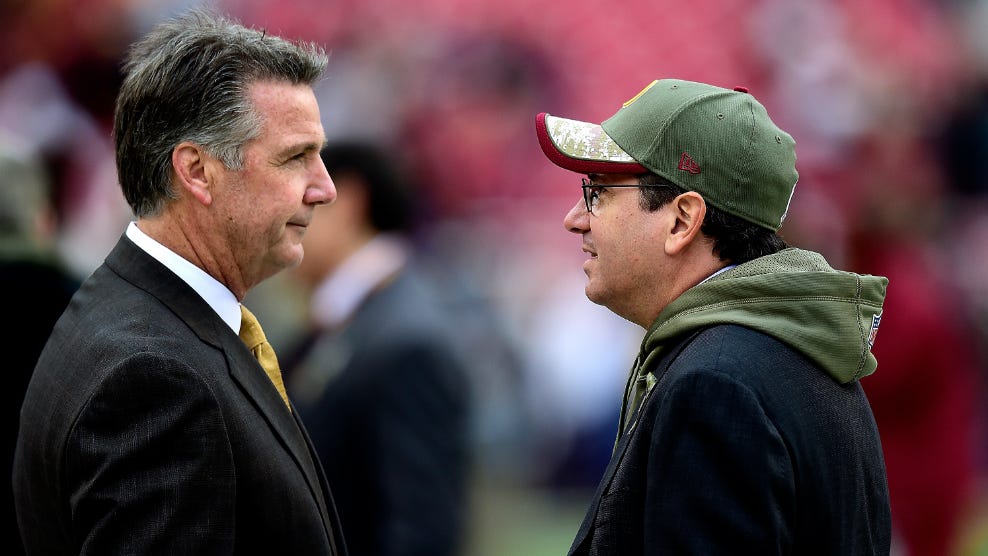 106.7 The Fan's Grant Paulsen and Danny Rouhier offered their view of the Washington Redskins on Thursday, agreeing as much that, after an 0-3 start, the 2019 season has the potential to bring wholesale changes to the organization.

Focusing in on Bruce Allen, the duo wondered what it might take for Redskins owner Dan Snyder to finally part with Allen after 10 years as team president. For Paulsen, Washington's decaying attendance and TV ratings are coming together at the right time, potentially setting up for a big change at the top of the font office.

"My answer to this question is, 'What has to happen for the end of Bruce?' You give us your succinct answer in a moment: 800-636-1067," Paulsen said, throwing the question out to callers. "I think we're here. I think he's out at the end of the year. I think it's over. I think they are moving on from Bruce Allen."

"What had to happen was what is happening by way of the attendance – wait till December – and the TV ratings," he said. "I do not think he survives this season. I think it was gonna take the kind of year they haven't had, because Jay Gruden's been too successful a coach, to be honest, where they go 3-13 and the bottom falls out, and they blow everybody out. And I think that's what's coming."

I've covered a lot of, uh, 'stuff' here over the years. A lot of bad. If things don't change soon, this has the potential to be the worst. Mainly because of the frustration/unrest from past meltdowns the base carried into this year. Attendance down; ratings down...Good morning!

yeah that to me is what's the worst part. I'd take the actual disappointment/anger over apathy. nothing worse than apathy...

"They'll keep some of the guys that are smart – Kyle Smith, Eric Schaffer," Paulsen continued. "They'll find ways to navigate some coaches and maybe keep a guy like Kevin O'Connell."

"But those are just kind of the window dressing things," he said. "I think Bruce is either just on stadium only, and they have a new front office structure. The coaching staff is led by a new head coach, who hires new coordinators. I really believe we've reached the end of the road for Bruce Allen."

This is speculation, to be clear, but one might presume – given Paulsen's long history covering the Redskins – that it's speculation coming from an informed place. Still a prediction, not reporting.

Rouhier wasn't so certain the die has been cast for Allen's fate.

"I think they're a couple moves away," Rouhier said. "I think when Dan Snyder has no other recourse – no one else that can get blamed, no one else when they go into CYA mode when things get bad.

"This year, the scapegoat's Jay Gruden," he said. "He's been set up to be the scapegoat since Jump Street. He is going to be the guy that they blame for all of this when it doesn't go right. And, even though it's on Bruce, and you and I both know that, they'll still have one more move left. I think Bruce survives again."