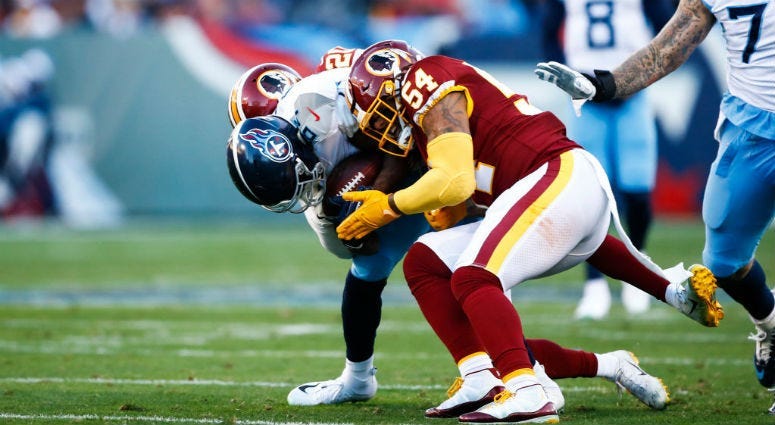 Believe it or not, training camp is almost here. After one of the most consequential Redskins offseasons of the last two decades, we’ll start to answer the biggest questions we have about the football team.

With 10 days to go until Richmond, The Fan started asking our 10 biggest questions about the 2019 Washington Redskins. We're asking one per day and give it our best shot at an answer. Here’s number nine.
The dynamic at middle linebacker changed dramatically on the third snap of OTAs when Reuben Foster tore his ACL. The plan was for Foster to play the “Mo” linebacker spot and pair with either Shaun Dion Hamilton or Mason Foster at the signal-calling “Mike” linebacker spot. Immediately the Skins had to pivot, with Hamilton sliding to the Mo spot and Foster back to the Mike spot for the rest of the spring.
Jay Gruden hasn’t declared that this will be the pairing nor the order come Week 1. Mason Foster’s best days as a Redskin came at the Mo spot next to Will Compton, though he has been solid at Mike each of the last two years. Hamilton was planning to play Mike before the Reuben Foster injury. That’s two possibilities before we even add in any other players.
Josh Harvey-Clemons has been steadily improving the last two seasons in his third-down role and would seem to be the favorite to stay there. However, Cole Holcomb, a fifth-round pick out of North Carolina, was drafted in part due to his coverage skills. If Holcomb really shines, he could challenge one of the projected starters. That would be a heck of a leap for a fifth-rounder, but the Skins really think they stole him that late in the draft.
The wild card is Jon Bostic. The 28-year-old veteran looked very good in the spring. He’s got talent but hasn’t been able to stay healthy and hasn’t been overly productive for any extended stretches. That said, could he shine through if given some opportunity? Absolutely. Nate Kaczor was also complimentary of him on special teams.