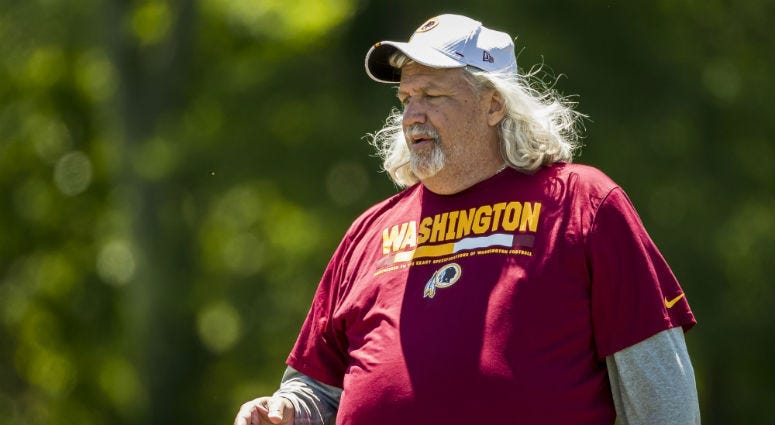 Believe it or not, training camp is almost here. After one of the most consequential Redskins offseasons of the last two decades, we'll start to answer the biggest questions we have about the football team.

With 10 days to go until Richmond, The Fan is asking our 10 biggest questions about the 2019 Washington Redskins. We'll ask one per day and give it our best shot at an answer.
10. How will the new defensive coaches impact this team?
The Redskins seriously considered moving on from defensive coordinator Greg Manusky after the 2018 season. Instead, they reinforced the staff underneath him with two former NFL defensive coordinators. Rob Ryan and Ray Horton both have had a mixed bag as DCs, but are well regarded as position coaches and bring decades upon decades of combined experience in multiple schemes.
Ryan is the better-known name, but Horton is primed to have a major impact. The DBs room was a mess last season. Josh Norman has made it clear he wasn't a fan of Torrian Gray, and it's hard to say the since departed coach did a great job keeping everybody locked in considering the escalation of tension with and eventual dismissal of D.J. Swearinger. Horton brings credibility with his resume, but also his demeanor. His cool confidence is a nice play off the fiery Jim Tomsula, Manusky and Ryan.

Horton can also shore up the knowledge gap Manusky has of coverages. While Swearinger was the most outwardly vocal, he wasn't the only one unhappy with the back-end calls. Horton will help Manusky make those calls this year, hopefully fixing the pass coverage woes that have haunted this team on third down for years.

Third downs can also be helped by Ryan, an aggressive and exotic blitz designer. While Ryan's first job is to simply decide who is on the team and how he's going to use them, he can also help Manusky scheme pressure that will actually get home. The Redskins haven't been shy at sending pressure under Manusky. It just hasn't been effective. A major draw of Ryan is fixing that.

The way the Redskins handled the Manusky situation was bizarre, but the outcome certainly has a lot of potential. There are a lot of smart minds, a good mix of personalities and a much wider variety of skill sets to match a talented group of players that are going to have to carry this team if it wants to make the playoffs.