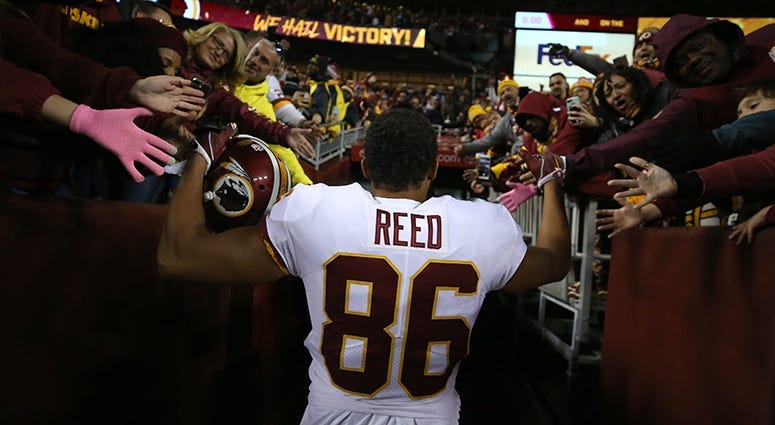 The Redskins have released tight end Jordan Reed after seven seasons in Washington.

Reed, 29, was a third-round pick out of Florida in 2013, selected 85th overall by former Redskins coach Mike Shanahan.

Reed has been a force on the field for the Redskins, when he could stay on it, bringing a game-changing dynamic to the offense that opponents had to game-plan for, often commanding double teams that allowed the rest of the Redskins offense to thrive. Reed made one Pro Bowl in 2016, but his best season in Washington came in 2015, when he caught 87 balls for 952 yards and 11 touchdowns over just 14 games.

But injuries became all too commonplace for Reed, who has never played a full 16-game season and has only played in 19 games over the past three seasons. Unfortunately, concussions, too, have become commonplace for Reed, with a consistency that has left many fans hoping he chooses retirement in the interest of self-preservation.

After suffering his seventh documented concussion during a preseason game against Atlanta, Reed missed the entire 2019 regular season for the Redskins. It was only Wednesday of this week when Reed finally cleared concussion protocol from that season-ending blow.

Sources to @TheAthleticDC: Tight end Jordan Reed cleared the league's concussion protocol program and, following his expected release from the Redskins, intends on continuing his NFL playing career in 2020. https://t.co/GvfQJpK34g

Reed is reportedly still interested in continuing his NFL career and will have to do so elsewhere. By releasing him now, Washington saves approx. $8.5 million in salary cap space. Reed signed a five-year, $46.75 million extension in May 2016 and still had two years remaining on that deal.

Fortunate for Washington, the 2020 free agency class is expected to be stocked with quality tight ends, with Atlanta's Austin Hooper, LAC's Hunter Henry and Indy's Eric Ebron among those slated to hit the open market. The Redskins had a meeting with one of Ron Rivera's former tight ends last week, but Greg Olsen wound up signing in Seattle.

The news was first reported by ESPN's Field Yates.

The Redskins have released TE Jordan Reed, per source.