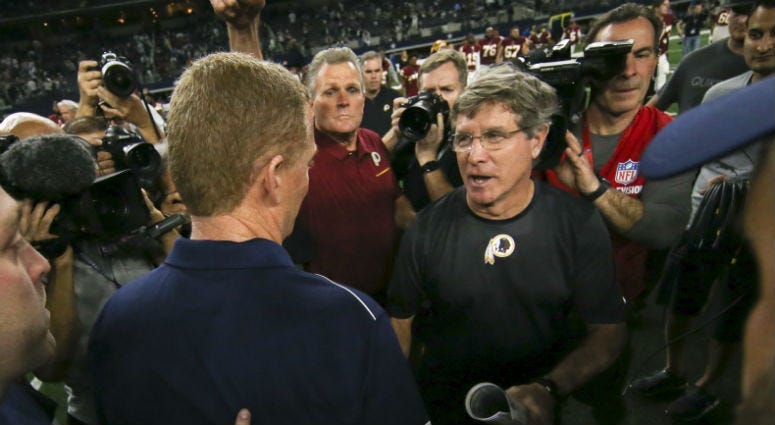 The Redskins' 2019 season is finally over. It ended in the disaster it deserved.

Washington turned the ball over twice in its first four plays. Eventually they lost 47-16 in a football game that started as a rock fight and ended in a blowout.

The Redskins defense surrendered over 30 points for the eighth time this year. That is half their games. It includes the last three, two of which they have surrendered more than 40 points.

It was a fitting way to exit for defensive coordinator Greg Manusky, who will certainly be out of a job by tomorrow morning. In fairness to him, this one was as much about the players playing the game, or, more accurately. those not. The Redskins were without all of their regular starters at corner and safety. They were also without their backups at safety. The longest tenured Washington DB was Aaron Colvin, who received his first defensive snaps in mid-November against the Jets.

Offensively, the lack of weapons was on display with Terry McLaurin out. Steven Sims, Jr. was easily the most impactful player for Washington in that regard. Adrian Peterson also had a nice game with 78 yards, finishing two yards shy of 900 on the year.

None of that matters.

What matters now is the next 24 hours, which sources say will be eventful. 106.7 The Fan reported Saturday afternoon that some team personnel expected a new coach to be in place within 48 hours. That would mean by Monday afternoon.

There's a very good chance a number of coaches are dismissed this evening upon returning to Ashburn. If not, the firings will start early tomorrow morning.

The Fan's Grant Paulsen has reported that Bruce Allen has already been told that he will no longer in charge of football operations by Monday, but an official announcement of some kind could come as well. The decision itself was first reported by NBC Sports Washington's JP Finlay.
Owner Dan Snyder was at the game Sunday and will fly in his private plane back to Virginia afterwards. There, he'll set the dominoes in motion.

Ships passing in the night. Bruce Allen goes to the locker room as Dan Snyder gets in his car to leave AT&T Stadium. pic.twitter.com/QtHygt07MZ

Redskins players have their exit physicals starting at 7 a.m. tomorrow. The locker room opens to the media at 9 a.m. The Redskins organization could look very different by then.

Follow @CraigHoffman for the latest Redskins news
Craig Hoffman is the Redskins beat reporter for 106.7 The Fan. His post-game columns are powered by Dell EMC and TVAR Solutions – transforming the federal data center.