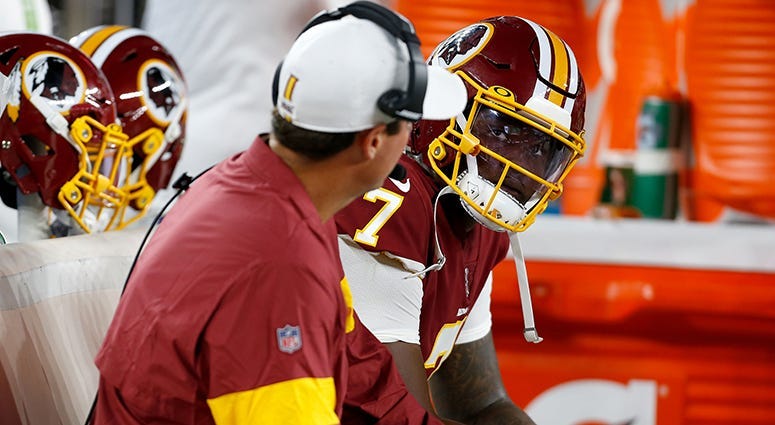 The Washington Redskins host their first football game of 2019 as they welcome the Cincinnati Bengals to FedEx Field for their preseason Week 2 matchup Thursday night.

Redskins coach Jay Gruden hasn't indicated which quarterbacks will play and when, but Dwayne Haskins figures to get the lion's share of the snaps, with Colt McCoy out a second straight week and Case Keenum in the driver's seat to win the starting job.

It will also be the first look at Jalan McClendon, a backup for three years at N.C. State and for one season at Baylor, who signed with the Redskins after third-string QB Josh Woodrum suffered a torn pectoral in last week's preseason opener against the Browns.

Redskins fans have yet to see running back Derrius Guice in action since he tore his ACL in Washington's 2018 preseason opener, which cost Guice his entire rookie season. As of Tuesday, Guice hadn't been medically cleared to play in games, according to Gruden. The head coach says Guice has been ruled out for Thursday's game.
Who: Washington Redskins vs. Cincinnati Bengals
What: 2019 Preseason Week 2
Where: FedEx Field | Landover, Maryland
When: Thursday, Aug. 15, 2019 at 7:30 p.m. (ET)
TV Channel: NBC4, NBC Sports Washington
TV Crew: Kenny Albert (play-by-play), Joe Theismann (color), Clinton Portis (sideline), Sherree Burruss (sideline)
An alternative game broadcast will air on NBC Sports Washington Plus. Along with the audio and visuals from the traditional telecast, "Predict the Game" will offer additional graphics and interactivity, allowing viewers to compete for $1,000 cash prizes, by predicting such things as rushing leaders and tackle totals.
Follow 106.7 The Fan on Twitter and Instagram