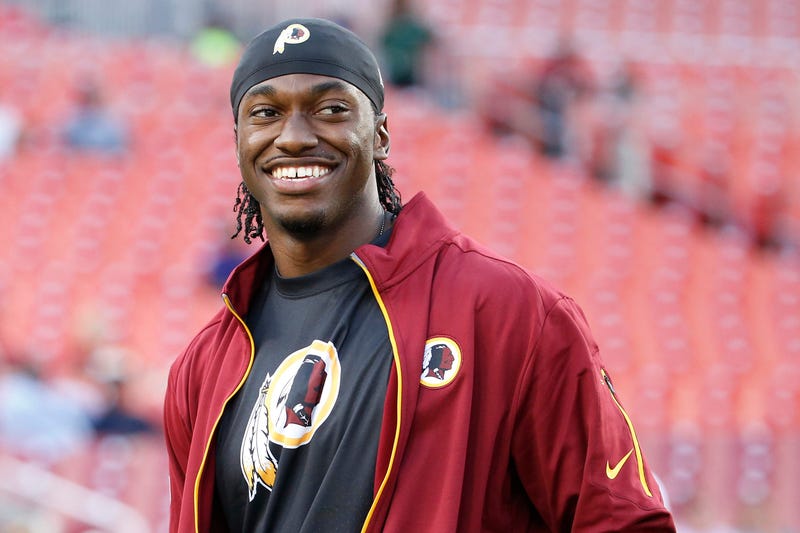 Baltimore must be farther away from Washington than believed because the Ravens didn't notice the train wreck that was Robert Griffin III’s career.

The most acclaimed player ever to arrive in Washington, as the Redskins' 2012 first-rounder, exited after 2015 as their biggest disappointment ever. Griffin was injured in Cleveland in 2016 and sat out 2017.

Now Griffin is the Ravens' problem after agreeing to sign a one-year deal on Wednesday.

Redskins fans swear they no longer care about Griffin, despite analytics showing stories on him are often the most-read on local sports sites. Maybe you love to hate him? Maybe you’re still mad it didn't work out. Bitter best describes most fans.

Injuries certainly undermined Griffin's career and he finished it off acting like a "who, me?" diva. The Ravens may learn of both problems soon enough. A one-year deal isn't much of a risk.

But backup quarterbacks worth a hoot are hard to find and Griffin at his best makes plays. He's best in small doses before some body part gives out.

Yet, Ravens fans, egged on by their Redskins neighbors over the 30-plus miles between stadiums, will want Griffin whenever starter Joe Flacco falters. Certainly, there will be a buzz if the two teams likely play during the preseason.

Please make it at FedEx Field, where attendance might reach 30,000 on an August evening with some Washington fans wanting to see the former Redskin. They might even wear the No. 10 jerseys that were once the NFL's top seller.

This is Griffin's unexpected last chance. After 2012 when injured in the playoffs, he did little. There was so much potential that ended with his knee injury that many fans couldn't see clearly through their desperation. He's only 28 years old, but his salad days have long since wilted. If this chance fails via injury, it's time to move on to Plan B in life.

Redskins fans claim they've moved on, but Griffin's signing with Baltimore will stir dormant feelings. And should he play well, it will re-ignite another civil war among fans.

Rick Snider has covered Washington sports since 1978. Follow him on Twitter: @Snide_Remarks
MORE FROM RICK SNIDER​
F.P. Santangelo needs a better view
Is Davey Martinez the difference in Nats?
Can Nats break the SI curse?