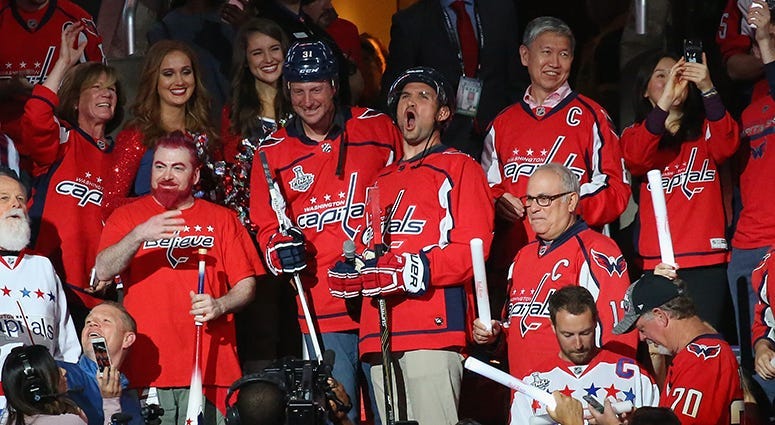 Ryan Zimmerman had some bets he "wanted to cash in on," which is why the World Series champion weirdly popped up at Capitals practice on Wednesday.

It finally answers the age-old question, 'How does Ryan Zimmerman handle himself on a pair of skates,' which D.C. sports fans have been left to wonder since he and Max Scherzer's memorable Stanley Cup Final appearance.

The long-anticipated answer: not too well...

"So he's been talking about it for quite some time and certainly some of their extracurricular s ran parallel to the Capitals," John Carlson told Chad Dukes during his weekly 106.7 The Fan appearance, presented by The Purple Heart. "He made a few bets that he wanted to cash in on, so he came out."

And what were those bets, exactly? In a video chronicling Zimmerman's follies on the ice, Nicklas Backstrom alluded to some years-old smack talk.

Presumably, skating on slippery ice isn't an activity baseball general managers prefer their players to participate in. Zimmerman, who is still without a contract, finally had an opportunity to pay up. It was a sight to behold, seeing the 35-year-old first baseman take the ice in full goaltender regalia, to take slap shots from Alex Ovechkin, who still maintains one of the fiercest shots in the NHL.

"I talked him a bit after," Carlson said. "He said he's happy he could check it off, but he's certain it will be the last time he does it."

And how did Mr. Walk-Off fare? "I imagine not too well," Dukes prompted.

"No, I don't think he did too well," Carlson said. "But I think that's expected. I think going from hockey to another sport might be a lot easier. When you involve skates, if you haven't skated for 15 or 20 years, it's a big difference out there."

"I imagine adding skates to anything makes that thing more difficult," Dukes said.

"Oh, absolutely," Carlson agreed. "Especially, I don't know his level of skating prior to his professional baseball career or anything like that. Yeah, certainly not an easy thing to do and not an easy thing, when you do try to pick something up, to jump right in against professional athletes."

"Well it's fair to say then, and I feel comfortable saying it, John Carlson a far superior baseball player than Ryan Zimmerman is a hockey player," Dukes prodded. "I think you can say that right now."

"Um, I don't know," Carlson said. "I mean, I did play baseball growing up, but he's certainly had a great career."

Carlson begins at the 20-minute mark below.