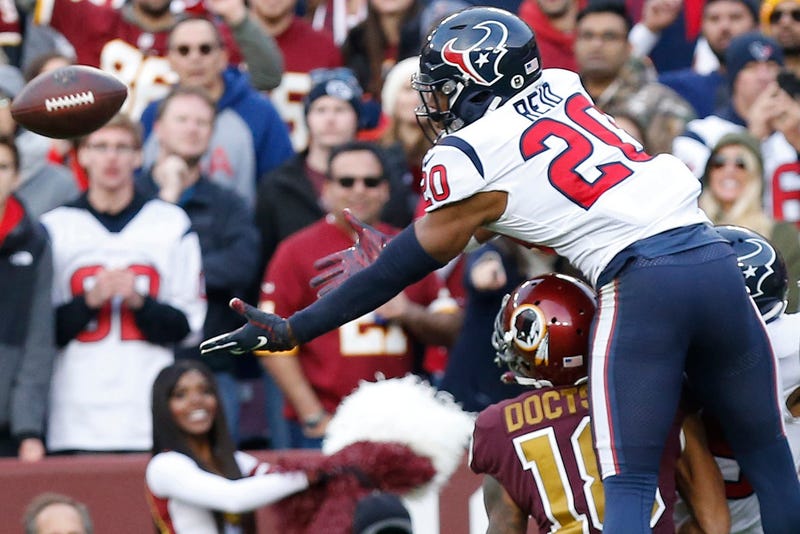 The officials had two opportunities to make calls in the closing minutes of Sunday's game that could have drastically changed its outcome.

One was called, and went against the Redskins; the other wasn't.

The first instance occurred with the Texans driving from the Redskins' 37-yard line with just over two minutes to go in regulation, Houston leading 23-21. Deshaun Watson, finding no open receivers, scrambled up the middle for two yards, drawing the two-minute warning and a fourth-and-3. The play also drew a defensive holding penalty against Josh Norman, who was covering DeAndre Hopkins.

The penalty gave the Texans a fresh set of downs, allowing them to eat another minute and four seconds of clock before kicker Ka'imi Fairbairn missed from 45.

Here is the holding call on Josh Norman on that 3rd down play, giving the Texans a 1st down inside 2 mins. #Redskins pic.twitter.com/IOnXyoKJs5

Don't see how you can make that holding call against Josh Norman in that spot. Game deciding call for ticky-tack contact across the field from the play. Let the players decide the game.

"It is what it is," Norman reacted to the call after the game. "You play defense and those plays, gosh, man, you just have to shake your head."

"It was bull crap," Santana Moss told Chad Dukes during his regular Monday appearance, presented by Paul Henry's Windows. "It was bull crap because if you wanted to call a real penalty, you could have called Hopkins on a push-off. He had a push-off before Josh even nipped his jersey. It's crazy, man. Everybody's out there battling, in the heat of the battle, and you're gonna make that play be the?

"To me, I think that right there lost the game. Because now you're dealing in a situation where you're losing your timeouts and the worst-case scenario for that whole incident. If we don't get that penalty, they're punting the ball to us. So with that being said, now you have a drive downfield and make a field goal or score a touchdown, instead of losing time and your timeouts."

The Redskins were left with 52 seconds to mount a game-winning drive that wouldn't come.

The officials would again influence the game's outcome on Colt McCoy's final pass of the game, this time with a non-call. From Houston's 45, Colt McCoy shoved a pass deep left down to Josh Doctson around the 13-yard line. Two Houston defenders would initiate contact with Doctson before the ball arrived, one seemingly crawling on Doctson's back, to make the ball nearly uncatchable.

Couple people asked to see if there was a potential defensive pass interference on the deep ball to Josh Doctson on 3rd down. Here's the clip. #Redskins pic.twitter.com/wkelVov7xc

A pass interference call would have put the ball in the red zone for a potential game-winning field goal with eight seconds left in regulation. Instead, Dustin Hopkins attempted – and missed – 63-yard field goal attempt to end the game, with Houston victorious.

"I don't know if it was interference against Doctson, but you had two guys," Dukes told Moss. "It looked like one of them initiated contact before the ball was even there."

"You are a wide receiver," Dukes said with a laugh. "But how do you call one and not the other?"

"You know one of the things I've always paid attention to, and I talk about the refs time and time again," Moss said. "When games are close, they're not going our way when it comes to them deciding it for us. No, they're not giving that to us. And that's just been something about Redskins and the refs.

"Like, when we're in the game and have a chance to really claw our way and make something of it, the ref's not giving it to us. I saw two plays when it could have easily went with us; and then one of them wasn't called at all, the other one was called against us. It's just a shame, man, that we have to be dealt that way."