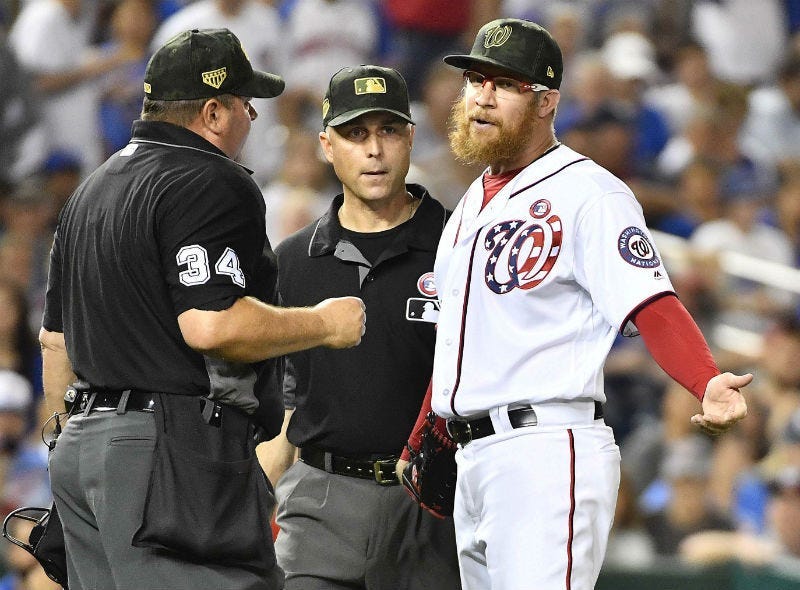 Sean Doolittle can certainly appreciate the sentiment Joe Maddon was trying to uphold in arguing against the Nats closer's delivery, but he sure didn't appreciate the timing of his interruptions.

Twice during the ninth inning Saturday, Doolittle's ninth inning, Maddon interrupted to argue with the umpire crew that Doolittle was making an illegal step with the toe tap in his delivery.

The Nationals still won 5-2, with Doolittle earning his eighth save of the season, but the interruptions were bothersome and unnecessary. When the umpires ruled Doolittle was not performing an illegal action, Maddon informed them the Cubs would be playing the remainder of the game under protest, a protest he withdrew the next day.
Doolittle – during his weekly 106.7 The Fan appearance Tuesday, presented by Lindsay Volvo Cars of Alexandria – was asked if he's seriously considering making any changes to his delivery.

"No, and it's weird how the rest of that inning, I pitched without the toe tap, which I do when I have runners on base," Doolittle said. "I don't tap my foot with runners on base, because I like to be able to, if I need to pick off to first or do an inside move to second base, it keeps those options open. It wasn't really something that was going to affect me whichever way they decided to interpret the rule in the moment."

"At the time, in the heat of the moment," he said, "I didn't full comprehend that he was doing it because he was trying to defend his player, but I just think it was the wrong time and the wrong place for him to try to make that point, to try to use my inning, to try to use me as a way to defend his guy, something that, a rule that had been handed down a month and a half ago.

"And they're not even that similar. I just really didn't appreciate that. That kind of fired me up a little bit. During the meetings with the umpires on the field, Sam Holbrook, the home plate umpire, he said, 'You're fine. You're fine. You keep it moving as long as you continue, it's one fluid motion.' He said 'you're fine.'"

"They just had to go through the formality," Doolittle said. "And then the Cubs said they were gonna protest the game, and then they didn't even file the protest afterwards, which kind of proves that it was just all for show. I can appreciate and respect on some level that he wants to have his player's back. But, in that moment, I don't know, I just didn't really appreciate the interruptions."