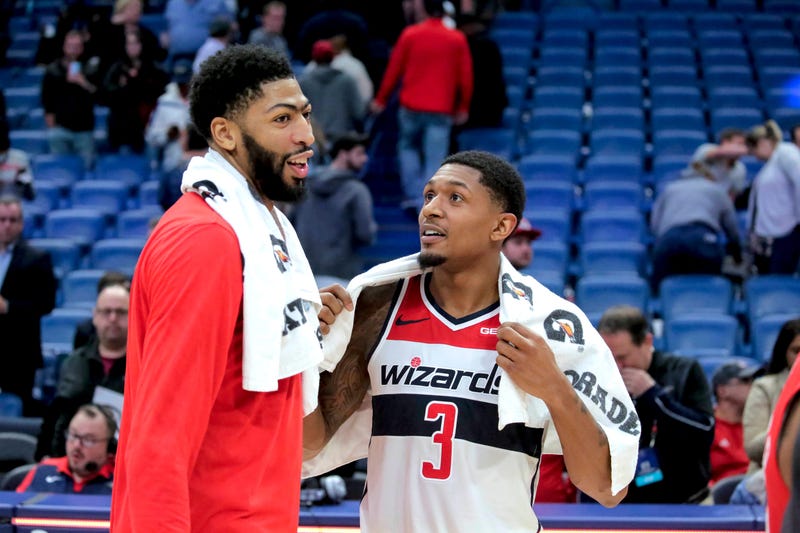 With the Feb. 7 NBA trade deadline fast approaching, the chatter has picked up surrounding Pelicans superstar forward Anthony Davis, who has requested a trade out of New Orleans.

Meanwhile, the Wizards now sit three games out of a playoff spot after falling to the tanking Hawks Monday night. Should Washington try and bring AD to D.C.?

"Put a package together!" Eric "EB" Bickel of The Sports Junkies said Tuesday. "Offer everything. He doesn't have a say over it, you trade him. Offer them everything! What's wrong with that?"
There are several roadblocks in the way of bringing Davis to Washington. For one, the Lakers — by far the most active team in the Davis trade talks ahead of Thursday's deadline — have reportedly offered a package of young talent, salary relief and draft picks the Wizards could not possibly match, and it appears the Pelicans might reject that deal.

Yes. So far, the Lakers have felt conversations with New Orleans have been one-sided and they are growing increasingly pessimistic about the Pelicans willingness to do a deal with them. https://t.co/vbMEcLTHwY

Additionally, it's unlikely Davis would sign a long-term contract with the Wizards. Per Shams Charania, Davis would only do so if he moved to the Lakers, Clippers, Bucks or Knicks.

Anthony Davis’ representatives have informed the Pelicans that he would sign long-term with the Lakers, Knicks, Bucks and Clippers if he is traded, league sources tell @TheAthleticNBA.

And then there's the Wizards' side the equation. Owner Ted Leonsis insisted last Thursday he will not trade John Wall, Bradley Beal or Otto Porter, one or two of which Washington would almost certainly have to offer New Orleans in a potential deal for Davis.

However, none of that will stop EB from dreaming.

"Offer them everything, and then deal with it," he said. "Obviously, you want to try to sign him to a long-term (deal), or it's not gonna work."

"(But) even if you lose him, you get out of everybody's deal. ... Say you get Davis here, and he leaves you. Well, you got rid of the other guys!"