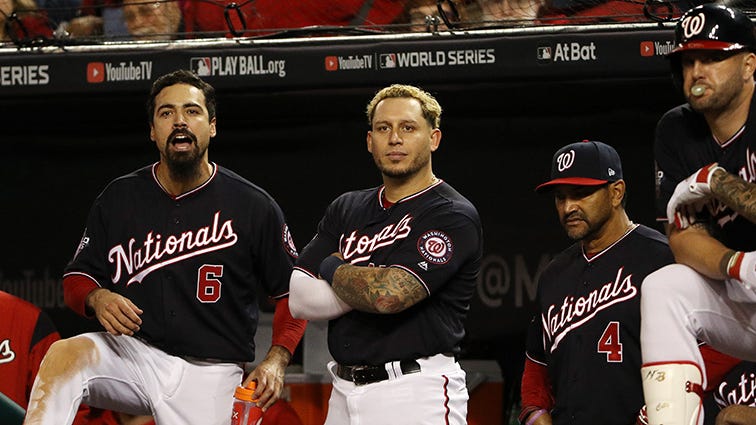 Maybe These Nationals Just Need To Be Underdogs

Haven't you heard? The Nats are done. Finished. No need to play out the string.

Only, that wasn't the feel in the home clubhouse after Sunday's 7-1 loss at Nats Park, where the Astros took a commanding 3-2 World Series lead after their third straight win on the road.

Normally, in times of dire straights, you can pick up on a feeling of contempt or dread. Like a fog that cakes the atmosphere, it hangs over the room. There was none of that in the Nationals' clubhouse.

Instead, there was certainty. An understanding of the circumstance – that if they don't repeat their early series success by stealing consecutive games in Houston, their season is over – but a foundational belief that this series is not over. That sort of confidence can be difficult to reconcile with reality.

Nationals fans just watched the Astros storm into D.C. and hold the home team to three runs over the past three nights, completely capturing every bit of momentum there was to be had in the series. They came to the park Sunday evening expecting to see Max Scherzer on the mound, only to learn as they walked through the gate that he'd been scratched suddenly with trapezius spasms. Things didn't go their way again, and the game hadn't even started.

"We're very aware of what's at stake," said Sean Doolittle, who pitched a scoreless seventh inning while allowing one hit, a walk and striking out his contemporary, Gerrit Cole.

"It's all about how you view that pressure, how you perceive that pressure," he said. "And hey, we still have a chance to win the World Series. So nobody in here is hanging their heads. We're looking forward to getting a day off, having a chance to kind of catch our breaths and regroup, and be ready to come out for Game 6."

The Nats do have a chance, however dwindling it may seem. Lest we forget they started out the World Series as the villains, ransacking Minute Maid Park to the tune of 17 runs en route to stealing Games 1 and 2 in Houston.

"Hopefully we can kind of have that villain mentality, kind of come together as a group on the plane tomorrow," Adam Eaton said. "We've won two games in a row before this year and we're looking to do that again."

The Astros returned serve and now have the Nats on the ropes, and oddly comforting place for them to be. It's where they've spent the majority of their season, battling back from a 19-31 start by playing .660 baseball over their next 112 regular-season games.

Three times this postseason alone they've staved off elimination, first with an epic three-run eighth-inning against the Brewers in the Wild Card Game, and twice more against the Dodgers, in Games 4 and 5 of the NLDS, the latter of which required back-to-back homers off Clayton Kershaw out of the bullpen. Howie Kendrick delivered the lethal blow with his 10th-inning Grand Slam off of Joe Kelly.

This, as torturous as it is to watch, is the Nationals' identity. Nothing, not even the threat of elimination, ever seems to rattle this team.

"I'm a big believer in do what go you here and some things you can't control," said Nats shortstop Trea Turner. "We hit the ball pretty well tonight for scoring one run, just right at people and bad aim. For me, don't panic. If you panic, you're only gonna make it worse. We feel good about going into Game 6 and now it's do or die."

Their comfort level doesn't come from some backs-against-the-wall fairytale, either. It's been beaten into them by the grind.

"It comes from playing 162 games year after year after year after year," said Turner. "You know, just because you went 0-for-4 or 4-for-4 the previous day, that doesn't really have an effect on the next game. You know, for me, that's baseball, and I think a lot of people get caught up with one game, one at-bat, one situation, and that's why you play seven games."

Here's one game you should get caught up with. After all the disappointment of the past three games, all the missed opportunities with runners in scoring position, one game separates the Nats from the Astros. Just one.

After all the baseball played in 2019, a combined 350 games between the two of them, the Astros are just one game better than the Nationals. And that can all change, in just one game.

And from where do they draw their confidence now?

"Well we've got Stras going in Game 6 and he's pitched so well for us throughout this postseason, starting in that Wild Card Game," said Doolittle. "Out of our four aces, who better to be starting a must-win game here?"

"Deal with Game 7 when we get there," he added. "But must-win game. That'll be, I guess, what? Our third one of the postseason? So we've been through this a couple times. Hey, if the road team keeps winning every game in the World Series, we're in good shape, right?"

Turner offered up an eerily similar quip when asked if there's a difference between playing on the road vs. at home.

"I think I would have rather played the last three games on the road with the outcome," he joked. "We won in their place and they won in our place. Once again, I think none of that really has an effect on the game for me."

Maybe things are as they appear and the Nationals are embarking on a death march into Houston. Or maybe there's a final act that's yet to be written of this comeback story.

The abundance of evidence would suggest the latter.