Eagles quarterback Carson Wentz would prefer to be traded by the Eagles this offseason and feels the relationship between the two sides is fractured, according to an ESPN report on Sunday morning.

"His relationship with the Eagles is all-but fractured -- in fact, it is fractured. Wentz is expected to ask the Eagles for a trade. He'll help facilitate a trade. The reaction of Jeffrey Lurie the owner will be vital to this one, but right now, Wentz clearly wants out of Philadelphia and a fresh start somewhere else. That will be a big story in the offseason." 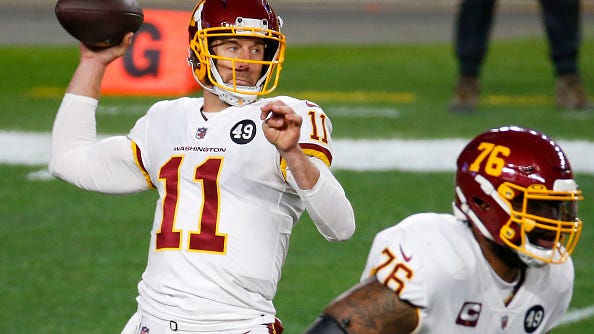 Alex Smith cleared to play for Washington with NFC East on line: report

This is the second ESPN report to come out about Wentz wanting out of Philadelphia. A large part of the reason seems to be the team’s decision to draft Jalen Hurts, and then eventually bench Wentz for the second-round pick.

Wentz could help the Eagles facilitate a trade by agreeing to a new deal with his new team, which he would reportedly prefer to be the Indianapolis Colts. Doing so, however, would not change the fact that trading Wentz would leave the Eagles with a $33 million cap hit -- that is unavoidable.

Wentz turned in his worst season in the NFL in 2020, leading the NFL in interceptions and having accuracy issues throughout the year. Although the idea of trading Wentz just two years after handing him a $128 million extension seems crazy, it really isn’t, and if Wentz wants out the Eagles can make it happen fairy easily.

Wentz is currently set to have a cap hit of $34.67 million in 2021. Cutting him is a non-starter — it would move his cap hit up to $59.2 million, and put the Eagles at around $89 million over the cap. They will not be releasing Wentz.

Trading him, believe it or not, actually has a positive impact on the available cap space.

Repeat: The Eagles save cap space in 2021 if they trade Carson Wentz. Yes, Wentz would still be on the books for $33.8 million, a massive dead-money hit. But if the Eagles don’t believe he is the answer anymore internally, and Wentz wants out, there is no question it makes sense to take the hit now, avoid an ugly situation, collect an asset and trade Wentz instead of waiting and dealing with the financial implications later.

The Eagles’ will have Hurts and Wentz on the books in some form in 2021 no matter what, whether it is Wentz’s normal cap hit or the dead-money cap hit. There is no getting around that.

But by moving on from Wentz this upcoming offseason, the Eagles would have have him completely off the books in 2022.

A plan it sounds like Wentz would be on board with as well. Report: Kyle Smith pleaded with Daniel Snyder to not take Haskins during draft

music
Maren Morris and Ryan Hurd on ‘Chasing After You,’ and chasing 1-year-old Hayes around the house
music
Taylor Swift tells fans she 'cannot reschedule' tour dates
1thing
1Thing: Turn off the power on March 27 for Earth Hour 2021
music
Lady Gaga tweets ask for the safe return of her French bulldogs, and for kindness
news
FDA panel gives green light to Johnson & Johnson coronavirus vaccine
music
D'Angelo helped to usher in the neo-soul movement, here’s how