Joshua Rhodes is going to remember this moment for the rest of his life.

The 18-year-old cancer survivor, who also lost his coach and fellow classmates in the 2018 Parkland school shooting at Marjory Stoneman Douglas High School, had to abruptly quit football three years ago following emergency surgery to remove a large brain tumor.

But the die-hard Giants fan has still kept his passion for the game alive, and on Thursday Rhodes was given the surprise of a lifetime: two tickets to his first-ever NFL game — Super Bowl LIV in Miami.

Rhodes, who plans to join the Coast Guard one day, was aboard one of their ships docked in Miami Beach to conduct an interview about his journey and what he’s been through over the last three years. What he did not expect to see was Giants rookie defensive tackle and 2019 first-round draft pick Dexter Lawrence suddenly appear.

Lawrence and the Giants teamed up with the NFL to surprise Rhodes with the tickets in what was an emotional moment for the cancer survivor.

It was not the first time Rhodes was surprised by a Giants player. Last year, the Make-A-Wish Foundation surprised Rhodes with a Giants-themed makeover of his 2006 H3 Hummer, and had defensive lineman Jonathan Jenkins at the unveiling. 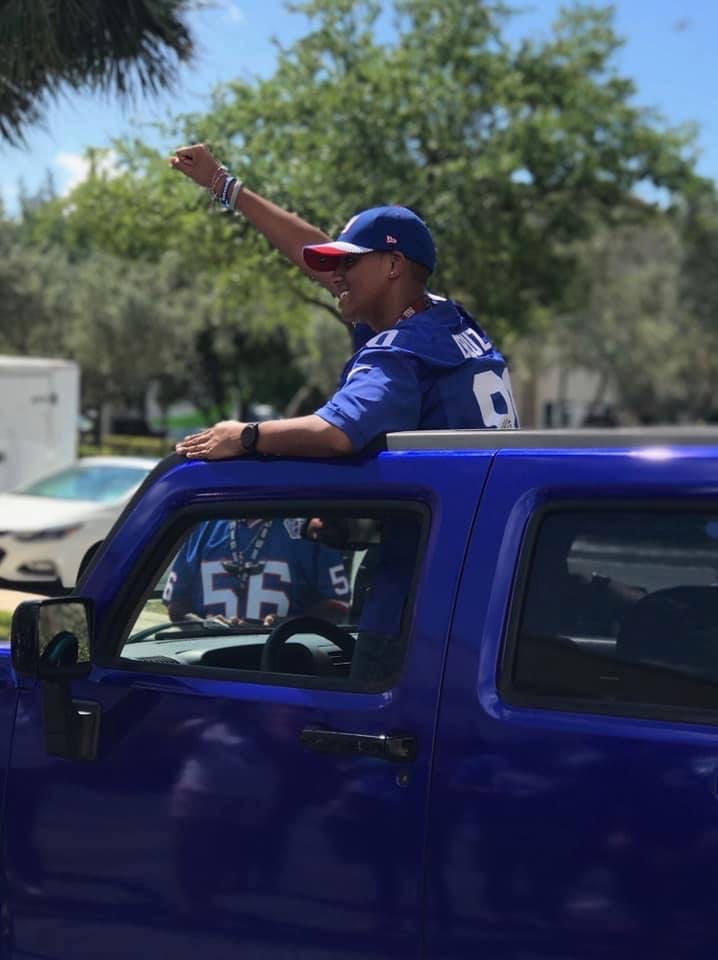 ...as a freshman on the football team at Marjory Stoneman Douglas High School in Parkland, Fla. He approached his coaches —Willis May and the late Aaron Feis —complaining of headaches and fatigue.

"I was your typical 16-year-old old boy," Rhodes told RADIO.COM. "I was going to Stoneman Douglas, I was playing football there and just having fun, until it all happened."

It was initially believed to be Vertigo, but his coaches encouraged Rhodes to get an MRI, which revealed a large brain tumor pressed against his optical nerve. The teenager had to be brought to a hospital in Miami via helicopter for emergency surgery.

Following the surgery, Rhodes and his family moved to Orlando to be closer to the hospital where he was receiving his cancer treatment. It was while in Orlando when Rhodes learned of the news that his former school had been the target of a mass shooting that killed 17 people.

Among the victims was Feis, one of the coaches who encouraged his family to take Rhodes to the doctor. Feis was killed shielding students from the gunman.

While Rhodes was no longer a student at Marjory Stoneman Douglas, he still had close ties to the school, and he was still a big part of the football team despite no longer being able to play.

"These are people who, when he was sick, prayed for him," Rhodes' mother, Maria, said. "They held up his jersey before every game."

The team has an annual award named after Rhodes, who continues to persevere and serve as an inspiration. For now, though, Rhodes is just a teenager looking forward to soaking up the Super Bowl experience.