The Washington Football Team has the same enormous question to answer this offseason as it did when Ron Rivera arrived a year ago. Is its starting quarterback of the future on the roster?

The names have been reshuffled a bit; they resolutely decided Dwayne Haskins is not the answer by releasing him before the end of the regular season last month. Alex Smith, a year older, proved he's more than capable of running Washington's offense when healthy, but his ability to rebound from any further injury to his surgically repaired leg has caused further doubt about his NFL future. When Smith suffered a calf strain/bone bruise, it rendered it completely immobile, leaving him as a sitting duck for defenders.

Kyle Allen, who hasn't been seen or heard from since suffering a season-ending dislocated ankle in Week 9, will be an exclusive rights free agent, so his future with Washington hangs in the balance.

And then you have Taylor Heinicke, who's only shown positive tape for Washington — including his brilliant performance in the playoffs against the Bucs, Washington's most important game of the year — but remains a relative mystery because of small sample size.

"I think he demonstrated some of the skills that you've got to have in order to be a successful quarterback in the NFL, especially nowadays," said former NFL quarterback-turned-analyst Brady Quinn. "His athleticism was something that probably was overlooked a little bit, when you go back to that game and really the Bucs defense, I don't think they realized what a good athlete he is." What Tom Brady told Taylor Heinicke after the game

Like others, Quinn is concerned about how little Heinicke has played. In five quarters total for Washington, he's looked like a superstar who's been overlooked by the rest of the league. Is that the real Taylor Heinicke? Or will an offseason of film study provide defensive coordinators with the ammo they need to shut him down in the future.

"The reality is he's got the skill set to be a guy that you're gonna put within the competition," Quinn said. "I don't know that I'm just gonna anoint him as 'the guy' based on one game or any game like that. I mean he has been around the NFL for a little while now, and so people have had a chance to give him a look and kind of look at him.

"Maybe it works out in Washington, maybe it doesn't," he said. "But either way, I would imagine they're gonna have someone they're gonna be bringing in this offseason who they're expecting to be their starter. It's probably not gonna be Heinicke."

Aside from Clemson's Trevor Lawrence, the unquestioned No. 1 pick in the upcoming draft, Quinn thinks Alabama's Mac Jones is the most NFL ready of the 2021 QB class, although he still thinks Washington selecting him at 19 would be setting him up to fail. It's his position that Washington needs to bring in a proven veteran quarterback, either through trade or free agency, someone who can handle stepping into what could be a chaotic offense as it's being rebuilt.

"When you watch his tape, and you watch his feet and how he moves, his eyes and feet move together through his progressions, just like you would if you're an NFL quarterback," Quinn said. "He's the one that's probably like second-most NFL ready of all the other guys who are in this crop or in this quarterback class."

"This roster does need a lot more help," he said. "I think [if] you put Mac Jones in that position, and he's coming from a team that had a Heisman Trophy winner at wide receiver, potentially the better wide receiver, [Jaylen] Waddle, who was hurt... and then you had the best offensive line and the best running back in the country. He's not walking into that scenario and he doesn't have that dynamic ability of running the football to overcome what they don't have.

"I think he would almost be kind of set up to fail a little bit, and so I'd rather see him go somewhere else, I'd rather see the Washington Football Team do something else. Go with best player available at that point, or, depending on need, and then also look at bringing in a veteran, whether that's Matt Stafford as you had mentioned or whoever else is going to be out there. " 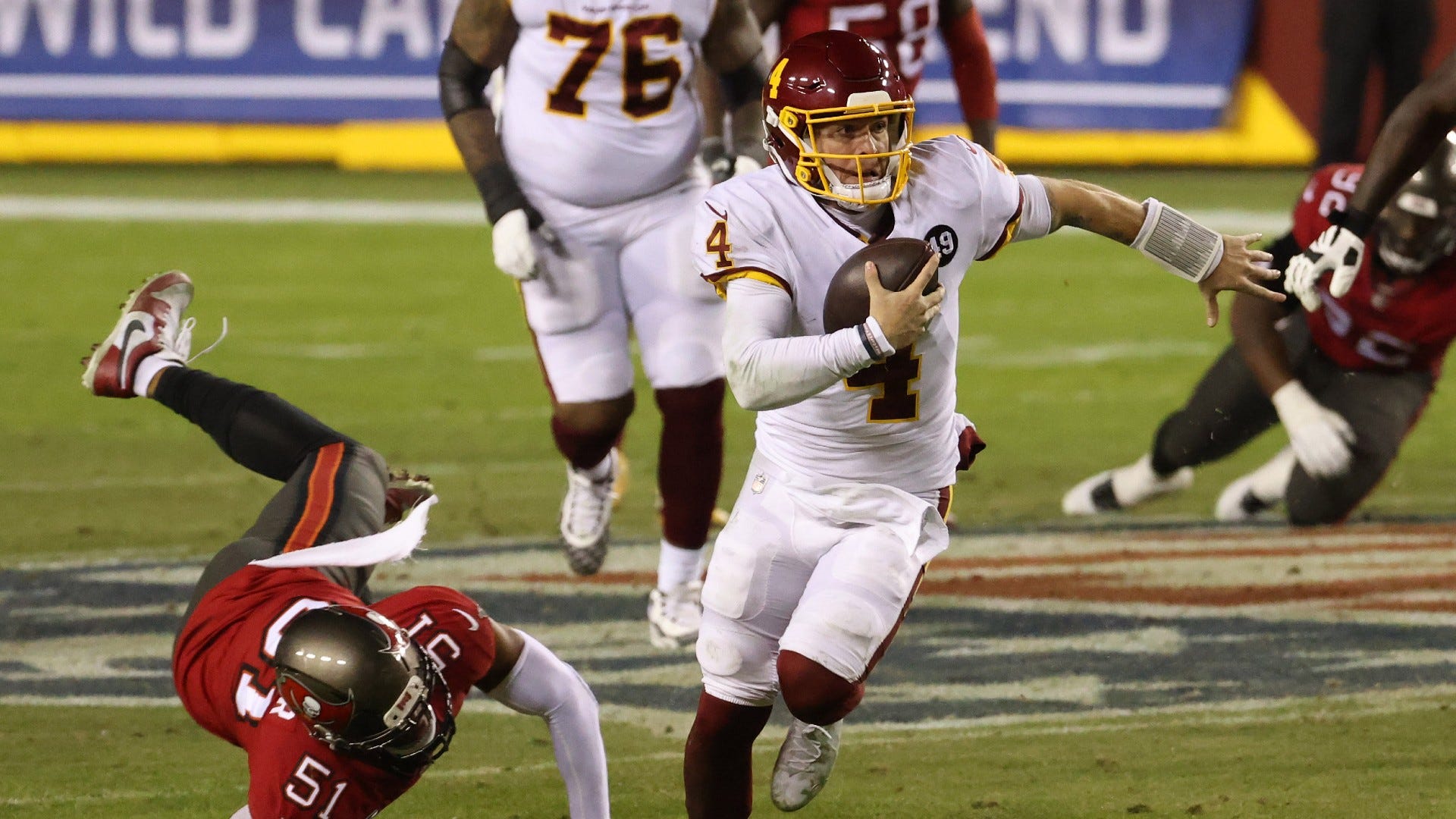 McLaurin, Moses praise Heinicke, want him to stay in Washington

If Washington follows Quinn's advice and goes the veteran route, rather than drafting a QB, there are a few situations around the league they'll want to closely monitor. First off, their eyes should be glued to what's going on in Dallas. Assuming Dak Prescott makes a full recovery from that nasty compound fracture and ankle dislocation (and by all accounts it's going well), Dallas has a potential big problem on its hands after handling all its other stars' contracts before the franchise quarterback's. Prescott has already been franchise tagged once, and Jerry Jones (oh, Jerry...) has now painted himself into a corner where he either needs to tag Prescott again (Washington fans, see: Kirk Cousins) or start gutting his roster so he can pay his QB top dollar. Or he can let Prescott walk...

It's unclear whether the Colts will re-up with 39-year-old Philip Rivers, with whom they went 11-5 this season but were a quick out in the playoffs. Rivers was playing on a fully guaranteed, one-year, $25 million deal and is now a free agent.

After taking a one-year deal to reestablish his market in New Orleans, Jameis Winston has yet to reestablish his market. The 27-year-old signed a laughably below-market-value one-year deal and proceeded to take all of 54 snaps this season, while learning behind one of the all-time greats in Drew Brees. The Saints didn't even turn to Winston when Brees got hurt, instead going with Taysom Hill. It seems like lightyears ago that Winston was the first overall pick, which goes to show you just how young — and perhaps ill-equipped — he was upon entering the league in 2015. Winston still has all of the dominant traits possessed way back then. Maybe after taking a year to decompress, he finally puts it all together at his next career stop.

The Lions and Matthew Stafford seem destined for a divorce and no one outside of Detroit quite knows why. The consensus seems to be Stafford, who has two years remaining on his deal, puts up great numbers, which have lined his pockets but haven't led to sustained winning. In 12 seasons since selecting Stafford first overall, Detroit's made the playoffs three times and are 0-3 in this appearances. They've finished third or worse in the NFC North eight times in that stretch. As one of the last to get in under the old rookie wage scale, Stafford, at just 32 years old, has made over $226 million in the NFL. Maybe he'll take a discount to play for a winner? He has two years remaining on his deal and Detroit just cleaned house, so that decision will be left to the next administration.

The Eagles just fired Doug Pederson after ruining Carson Wentz for absolutely no reason. One year after rewarding Wentz with a four-year, $128 million extension ($107 million guaranteed), Philadelphia drafted Jalen Hurts in the second round. Wentz, after getting sacked eight times by Washington in Week 1, has looked absolutely lost all season. When he's not looking over his shoulder, he's staring at ghosts. Hurts took over as the starter in Week 14 and looked good, and now everyone wants to know what happens next. Trading within the division is generally a non-starter and after getting fleeced by Philly with Donovan McNabb, Washington should have every alarm bell going off if the Eagles were to reach out about trading Wentz. But he's only 28 and still has a ton of talent, so you could certainly do worse as far as reclamation projects go. Then again, perhaps after firing Pederson, Philly pivots back to Wentz knowing there's almost nothing they can do to get out of that contract and have to make it work.