When Ron Rivera made the controversial decision to bench quarterback Dwayne Haskins, how the head coach chose to relay the information to his team actually strengthened his relationship with his players.

"Honestly I think it's been a (breath of fresh air) just having Ron here because he listens to us as players, as just a collective group, on things that we see that we want to do," Morgan Moses told reporters Thursday. "As a team, we move together. There's no decision that he makes and he just blatantly makes it, and doesn't include us in it."

"When he came and told us about the whole Dwayne situation, where they were moving forward, he sat in front of the team and said there was gonna be some things that were going to be changing, that he was going to be visiting the rooms and kind of just sharing what he feels that needs to happen," he said.

"And so when you have a coach like that, that is honest and upfront with you about it, obviously it's a hard pill to swallow when somebody's telling you, 'Hey, you're not doing this,'" Moses continued. "But at the end of the day you respect that person, because instead of having somebody else tell you, he's sitting there telling you to your face."

"I think it's very important that we have a coach like that, that we can talk to and he can talk to us, and we can get feedback from one another so we can move forward," he said. "At the end of the day, we all have one goal and that's winning this division and winning a championship.

"So it's an all collective group decision, so we're just moving forward and trying to be the best that we can be, and prepare for this game this week."

A Washington Post report last week signaled Haskins was hurt by his "lack of preparation," which resulted in the second-year quarterback overthrowing passes and missing opportunities to hit open receivers. 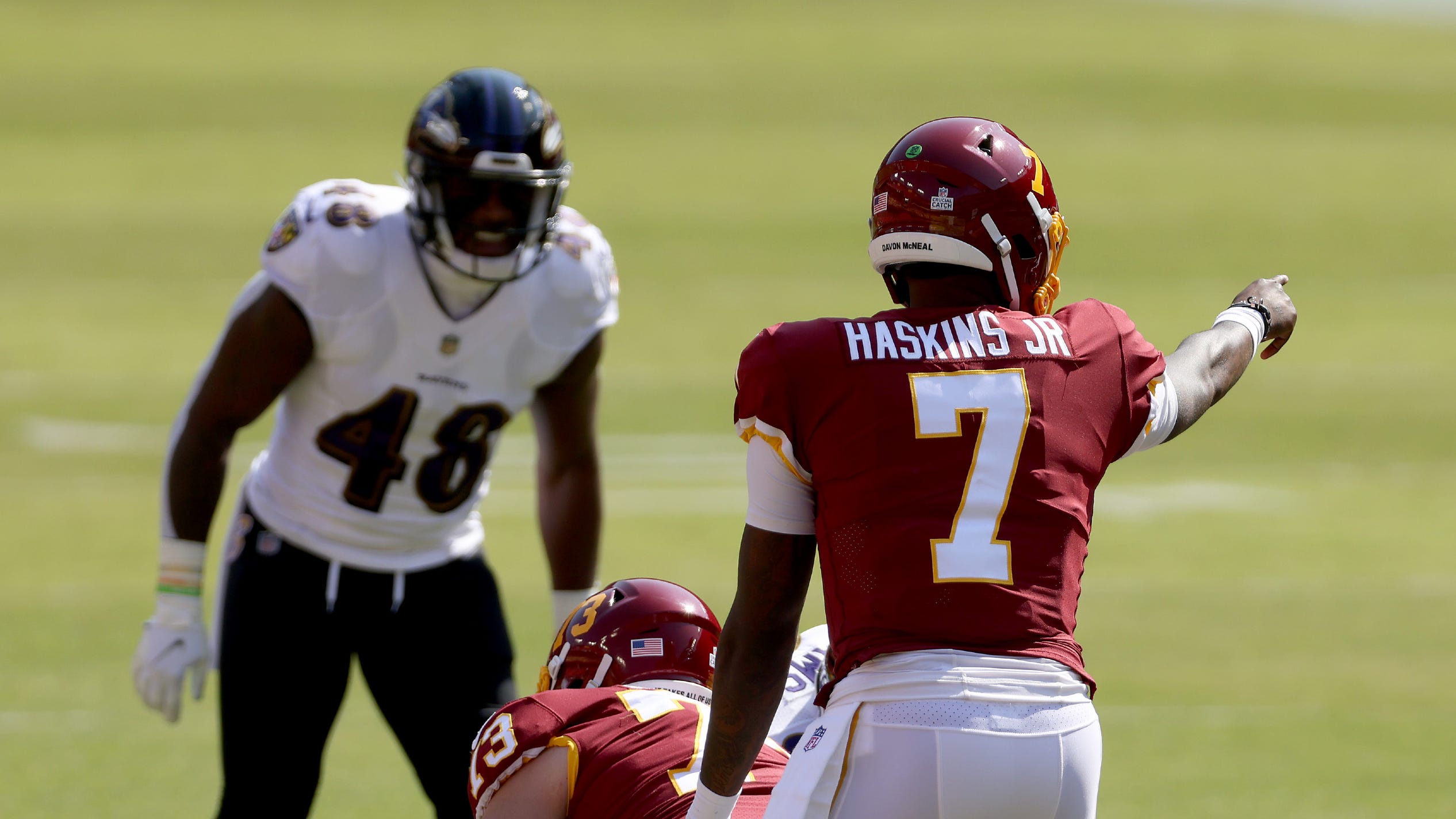 Asked whether Haskins' offseason work ethic carried over into the regular season, Moses said, "Obviously being in season and the offseason, there's a lot less time that you have, obviously."

"I think he does a great job of getting himself prepared," Moses continued. "It just sucks because you know, you look at it and the kid didn't have an offseason and it takes a lot to learn, to dissect a whole new offense, and not having an offseason kind of hurts you a little bit."

"We brought in a lot of (guys). We brought in Dontrelle Inman late in training camp," he said. "And so just kind of building that camaraderie with the guys, and at quarterback, that relationship is the most important with your receivers. You lose Kelvin Harmon, a guy that you trusted last year as a rookie receiver; you lose him early on while training. So there's a lot of things you could sit here and say, but at the end of the day, you just gotta keep your head up and move on and just prove people wrong."

"I think he's gonna do that," Moses said. "I think he has a lot of learning to do on himself, but I think, man, the sky's the limit for that kid still and I still have his back. Regardless of what happens, that kid will be able to play in the league for a long time."

As a mentor to the young quarterback, it was difficult for Moses to witness Haskins go through being benched. There's no sugarcoating what took place. Haskins went from the 15th overall pick in 2019 to third-string QB in the span of 18 months. But Moses believes Haskins will come out better for it.

"He's young, man. You're talking about a guy that is, what, 23, 24 years old, has a lot of football left in his life," Moses said. "Right now it's for him to figure out what he needs to do to get better, to better himself, that way when he gets the opportunity — whether it's here or another place — he's ready."

"When you have adversity hit like this in somebody, it brings out the best out of somebody," he said. "So I'm looking forward to seeing what he brings to the table and how he answers it."