There is no way Washington would have beaten the Philadelphia Eagles last year when trailing 17-0. Indeed, they lost the 2019 opener when leading the Eagles 17-0.

But head coach Ron Rivera transferred his “Riverboat” nickname to a new town with a gutsy fourth-and-one call late that led to a 24-17 lead rather than maybe 20-17. Rivera went for the kill shot and Washington won 27-17.

Think Jay Gruden would have won that game over the last six years? No way. They would have lost 30-7.

Washington showed the toughness that Rivera displays as he undergoes cancer treatments while even receiving an IV at halftime. 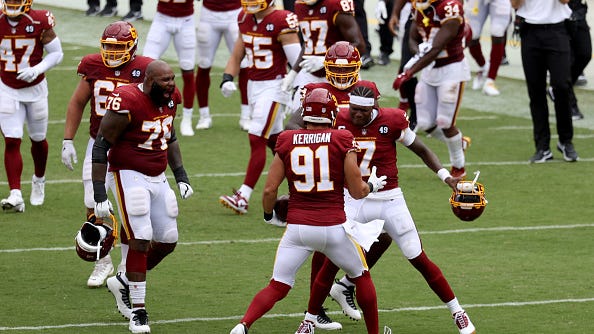 This team is determined not to let down Rivera or themselves

The defense has too much talent to give up a touchdown before most fans would have settled in their seats if FedEx Field was allowed to have fans this season. The defensive line has been the only thing everyone has talked about since drafting Chase Young second overall in April. Sure enough, five defensive linemen combined for seven sacks while linebacker Jon Bostic just leveled Philadelphia quarterback Carson Wentz on a fourth down in the second half.

When Philadelphia wilted with persistent injuries in the second half, Washington just wore the Eagles out. That’s superior conditioning. The Eagles were gassed after the early lead and Rivera’s summer of tough practices left Washington the better team.

It wasn’t pretty at times. The offense still needs a second receiver, but Terry McLaurin did his job and tight end Logan Thomas is your fantasy league sleeper with a touchdown. The running game was more about persistence than excellence, but there’s nothing wrong with banging away. The left side of the offensive line was spotty as expected.

Meanwhile, quarterback Dwayne Haskins showed his leadership with a halftime talk and backed it up with 27 straight points. He even side-armed a completion. Haskins looked cool throughout despite stats that were just OK. The key was no negative plays. He even ran a couple of times into defenders on keepers. The second-year passer didn’t look afraid to succeed.

Indeed, this team is unafraid to succeed. It may not be a playoff season, but then 2020 is the year of uncertainty and crazier things have happened. If the defense continues to set up the offense for short-field touchdowns, Washington can beat anyone. A good defense always gives a team the chance to win and that’s exactly what happened Sunday.

Maybe Philadelphia isn’t the benchmark of who to beat to become a playoff team, but in the past Washington would have folded early. Those days are gone under Rivera.