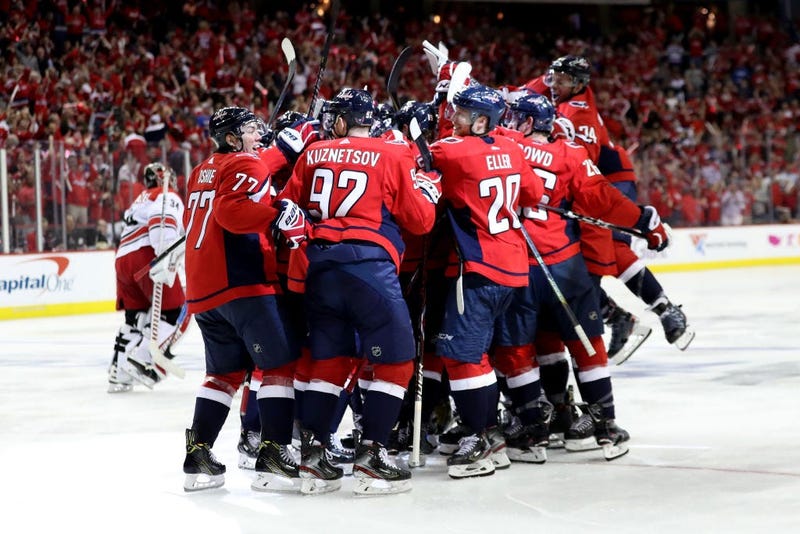 The Capitals are in control of their first round series against the Hurricanes, winning both games on home ice to take a 2-0 advantage to Carolina.

But while Washington has started its Stanley Cup defense the right way, Isabelle Khurshudyan sees plenty of room for improvement.

"If there is a weakness, it's on D with (Michal) Kempny out. (Christian) Djoos is playing less than seven minutes per game right now, and (John) Carlson is up to like 27," Khurshudyan told The Sports Junkies Monday.

"I don't know how sustainable that is if you're gonna play 20-plus playoffs games, so I think they're still figuring some things out on the back end as far as who's playing, who do you trust to play where, who plays with Carlson. Carlson's been shuffling between three different partners at various points."

In addition to the defense, Khurshudyan says the Caps need more offensive production from their third and fourth lines.

"I think for the Caps now the next step for them is to start getting some guys chipping in in the bottom six," she said. "Obviously (Jakub) Vrana, (Brett) Connolly, their fourth line, they all had good seasons."

"If those guys can get on the board, and the Caps are a four-line dangerous team, that's gonna be huge for them going forward."

As far as making major adjustments, however, Khurshudyan believes the Caps' best course of action is sticking to and executing their game plan.

"What helped them last year was they kept things the same, stayed to their game, and didn't make a lot of changes from game to game," Khurshudyan told the Junkies. "I think as long as they're winning, (Todd Reirden)'s gonna keep the same lineup. Maybe tweak a few system things here and there."

"I'm sure they're gonna try to make some adjustments to their power play after Carolina got the better of them in Game 2. But other than that, I think it would be wise for them to just keep it simple and stick to what's been working these two games. When you're up 2-0, you shouldn't change too much I don't think."