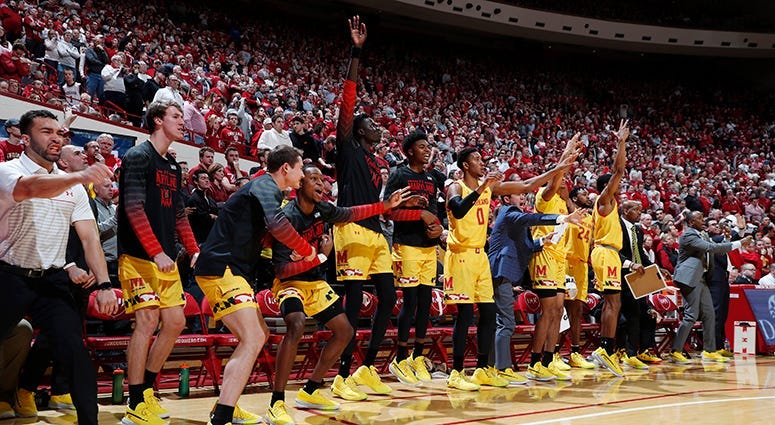 Maryland won a big game, on the road, from behind, against a good opponent. Now, the Terrapins are about to discover if they can beat quality teams repeatedly like March demands.

No. 15 Maryland hosts No. 18 Iowa on Thursday and No. 25 Rutgers on Feb. 4 before traveling to No. 19 Illinois on Feb. 7. The Terps (16-4) either emerge the serious contender many expected or limp to season's end as they have too often done under coach Mark Turgeon.

After stealing a last-second 77-76 victory at Indiana on Sunday, maybe the Terps will rise to the challenge. It beat a comparable team that outplayed Maryland the entire second half until the waning moments, when defense fueled a seven-point rally and Jalen Smith scored on the last possible chance to do so.

That win was why Smith and senior Anthony Cowan returned. The duo really wasn't ready for the NBA last spring and invested in themselves by staying in College Park. Pollsters thought the duo made the Terps one of the top teams in the nation, only to watch Maryland stumble against lesser teams. Anyone watching the Terps in recent years expected it. Maryland is too often a soft 20-win team.

Cowan has been quieter this season than expected despite averaging a team-best 15.5 points and 34 minutes per game. Yet, he's always ready with a big shot. It's just that Cowan goes missing in stretches. At least it's not during the closing minutes.

Smith has been quickly rising, earning Big Ten Player of the Week after posting 25 points and 11 rebounds in a road victory at Northwestern, followed by 29 and 11 at Indiana. Overall, Smith is an All-America contender, averaging 17.7 points and 9.4 rebounds against Big Ten teams.

If the Terps can continue receiving quality play from Aaron Wiggins and Darryl Morsell, they have a chance of a March run. But, the key is Smith inside. The Terps offense doesn't run consistently through defenses and nobody shoots well enough outside to break the zone.

The Terps really need to play smothering defense to crack opponents. They also need to play well in first halves when too often showing no energy and creating double-digit deficits. It's maddening to watch Maryland early, though the last two games were much better efforts. But every time Turgeon thinks he's gotten through to players, they go mentally blank on the court and sometimes it's too much to overcome.

And that's what March is all about – 40 minutes of quality ball. If Maryland can win at least two of its next three against strong opponents, then maybe March won't end maddeningly early. These games will certainly tell.