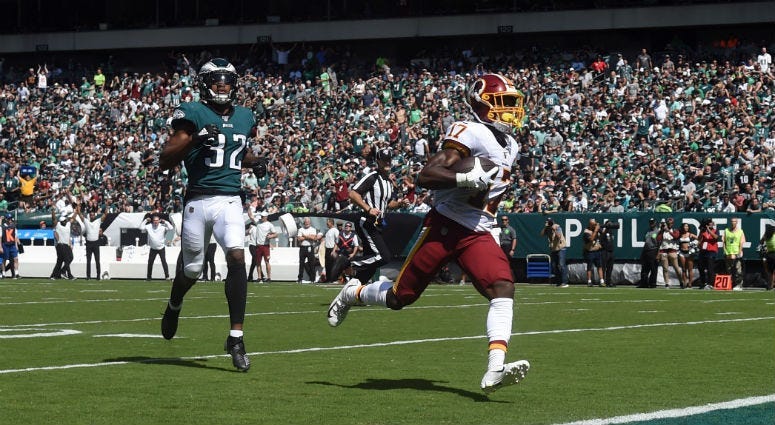 The Washington Redskins offense came out firing on all cylinders in Sunday's season opener against the Philadelphia Eagles.

The Redskins amassed 288 yards of offense and took a 20-7 lead into halftime. Much of their offense came on chunk yardage, with tight end Vernon Davis scoring a 48-yard touchdown after hurdling over enclosing defenders after the catch.

Five minutes into the second quarter, Case Keenum found rookie receiver Terry McLaurin – a hidden weapon, of sorts, who played minimally in the preseason – on a 69-yard touchdown pass. Case ended the half having completed 16 of 22 passes for 257 yards. McLaurin caught three total passes for 104 yards.

McLaurin, in his first NFL game, has more 100-yard receiving games (1) than Josh Doctson did in his three seasons in Washington.

Terry McLaurin with 104 receiving yards in the first half of his first NFL game.Josh Doctson had zero 100-yard receiving games in three seasons.

With Adrian Peterson inactive, Derrius Guice carried the load for the Redskins' running game, going for 21 yards on seven rushes and catching two balls for an additional 13 yards.

Washington's offense has looked fantastic, a welcomed surprise against their division rivals.