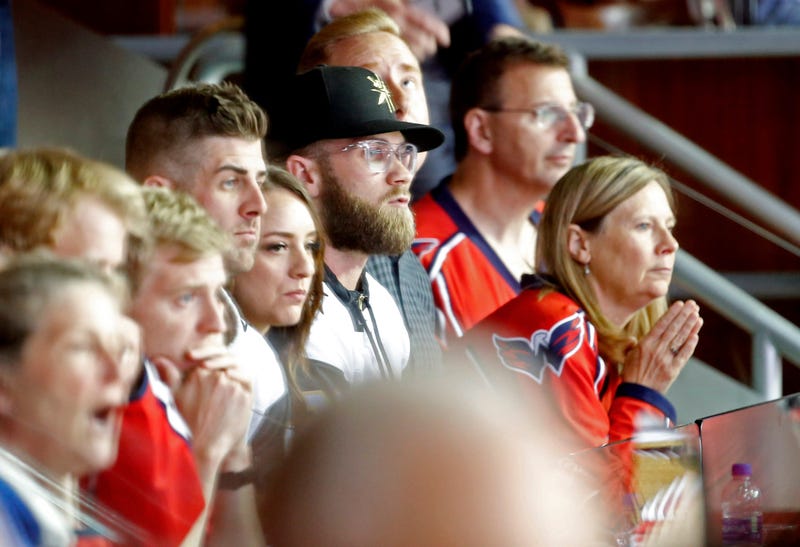 Bryce Harper didn't hold back his Vegas Golden Knights fandom during Game 4 of the Stanley Cup Final at Capital One Arena on Monday night.

The Vegas native has attended a number of Capitals games through the years, even supported them by sporting their colors to games.

But Harper has unabashedly jumped on the Golden Knights' bandwagon in their inaugural season, his first year of living in which he's been able to support a professional team from his hometown.

Harper and his wife, Kayla, cheered on the Golden Knights from a suite as his Nationals teammates, Ryan Zimmerman and Max Scherzer, lost their minds for the Caps down below.

Although, Harper didn't have much to celebrate Monday night, as Vegas fell to Washington, 6-2, to go down 3-1 in the series.

can't he just stay away?it's just so annoyingwhatever.... only have to deal with him a few more months https://t.co/YdHshmbRyj

"Let me address the Bryce issue," Eric Bickel of The Sports Junkies said Tuesday morning. "I've got no problem with Bryce being a Knights fan. He's from Vegas. Of course. I get it. But here's what I would say. Let's be real. That team's been around for 20 minutes. He's been a guest of the Capitals for years, in the locker room, met multiple times. Worn the jersey, that whole kind of thing."

"If it was me, I would keep it to a dull roar," he said. "I'd root for the Knights if I was from Vegas, probably, but I'd probably stay at home, and I wouldn't troll the entire area and the team that's had you there as a guest for years. I personally wouldn't."

"It's a little less than classy, in my opinion," Bickel went on to say. "But you know what? You do you. We're only going to have to deal with you for a few more months anyway."