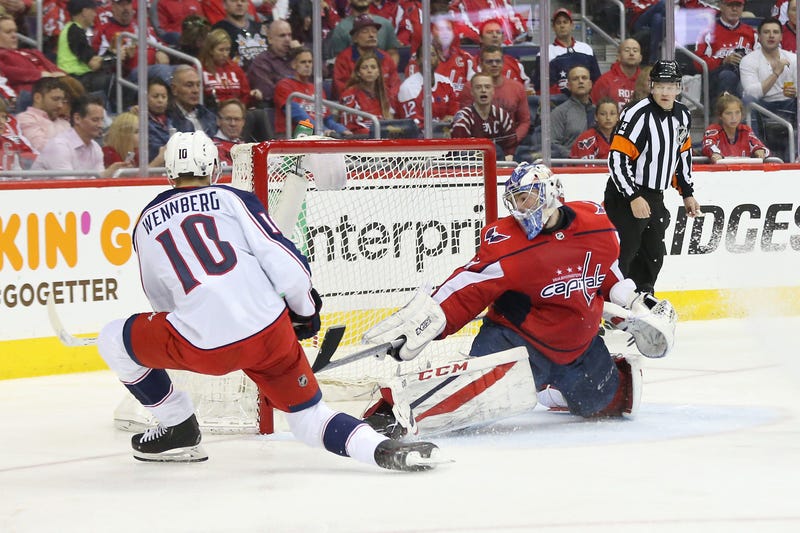 In typical D.C. sports fashion, the Capitals had a 2-0 lead on home ice, a 3-2 lead mid-way through the third period, and still lost in overtime of Game 1 of the Eastern Conference Quarterfinals at Capital One Arena Thursday night.

The Caps dropped a 4-3 decision to Artemi Panarin and the Columbus Blue Jackets.

So what went wrong for Barry Trotz's crew? The answer is plenty.

1 – Third period penalties by Tom Wilson led to the Blue Jackets' second goal by Thomas Vanek, a mere 13 seconds after Wilson went to the box. It wasn't a smart penalty by Wilson, who admitted after the game that he can't "finish his check there" when the Caps had a lead and also were already down one of their top penalty killers in Jay Beagle.

A bad penalty by Andre Burakovsky allowed Seth Jones to streak down the right wing and bury a feed from Panarin to tie up the game. Wilson could not clear the zone and the Jackets quickly made them pay.

The Columbus power play coming into the game was only 25th best in the NHL at 17.2 percent, and 30th in the league on the road at just 13 percent.

2 – On the game-winning goal by Panarin in overtime, he had way too much speed for a tired Caps defensive group and, in this case, Dmitry Orlov. Panarin, Columbus’ leader in points on the year, with 82, went right around Orlov up the left side, quickly transitioned to his forehand and went top shelf cross-corner over Philipp Grubauer.
The Caps were without defenseman Michal Kempny for the entire last two periods plus overtime after he was crushed into the boards on a dirty hit by Columbus’ Josh Anderson, who was given a five-minute major and game misconduct.

Trotz said Kempny will be re-evaluated over the next two days but has an upper-body injury, and if he’s not available for Game 2, it’s likely that Christian Djoos will take his place.

3 – Trotz also said he would re-evaluate his goaltending decision for Game 2 and could possibly go with veteran Braden Holtby. He thought Grubauer was “good” but clearly left the door open. Grubauer stopped 23 shots, but allowed two power-play scores and the excellent shot by Panarin.

His fault? Probably not. But Trotz needed him to be a lot better considering the Caps were short a defenseman and already down Beagle.

"Overtime" – Evgeny Kuznetsov's two goals after the five-minute major late in the first came 29 seconds apart, the second-shortest span for playoff goals by the same player in Caps history. Per Elias, Larry Murphy did it in a 16-second span on April 10, 1985.

Kuznetsov took a bad penalty in the third, a back-and-forth slashing battle with Panarin.