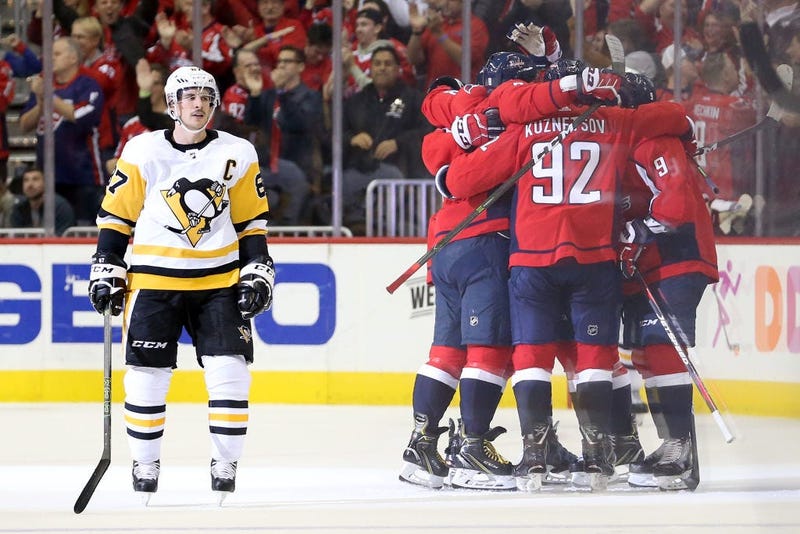 Photo credit Will Newton/Getty Images
By Chris Russell 106.7 The Fan

The Capitals and Penguins were deadlocked 1-1 in the third period when Pittsburgh's Evgeni Malkin took matters into his own hands, knocking T.J. Oshie into next Friday with an illegal hit to the head.

He was correctly assessed a five-minute major penalty and a game misconduct.

Oshie left the ice for a second time Wednesday night but returned with a decisive answer, the game-winning goal with 1:14 left off a perfect feed from John Carlson, as the Caps beat the Penguins 2-1 at Capital One Arena.

It almost didn't happen, as Oshie had to clear concussion protocol before returning with a little less than four minutes remaining.

"They (the Capitals medical staff) did a good job making sure I was OK," Oshie told reporters after the game. "Probably would have come out a lot sooner, but they wanted to be 100 percent. So, thanks to them."

"I passed my concussion test and we won the game," Oshie added.

He had to ride the exercise bike to keep his legs ready, and ready he was, as he racked up his eighth goal of the season to hand the Penguins a fifth-straight loss.

"I was happy I was able to come back."

Despite leaving game twice with injury, @TJOshie77 returns to score winning goal with 1:14 left in the game #CapsPens #ALLCAPS pic.twitter.com/AumDFh9Lv8

It was not Oshie's concern what happened to Malkin moving forward. Malkin's likely to receive a call from the NHL Department of Player Safety.

Oshie said that maybe Malkin "was coming to him, and so he threw the reverse shoulder out there, which I try to do that all the time." Oshie also admitted, "I did it at least once tonight. I just wasn't expecting it being on the PK."

He said of Malkin, whose Penguins were in the middle of a power play, "You don't typically go for hits" with the extra-man advantage.

In the first period, Oshie's face was carved up by the stick of defenseman Olli Maatta in the Caps' zone. No penalty was called, despite clear video evidence and a cut to the bridge of Oshie's nose. He was down on the ice for about two minutes.

Oshie missed the rest of the first period, where he received two stitches but returned for the start of the second.

The incident adds another chapter to the heated rivalry between the two teams.

Just last May, Capitals forward Tom Wilson was suspended three games by the NHL for a dirty hit on Zach Aston-Reese in Pittsburgh. Wilson has not been able to play in either game against the Pens this year because of the current 20-game suspension he is serving.