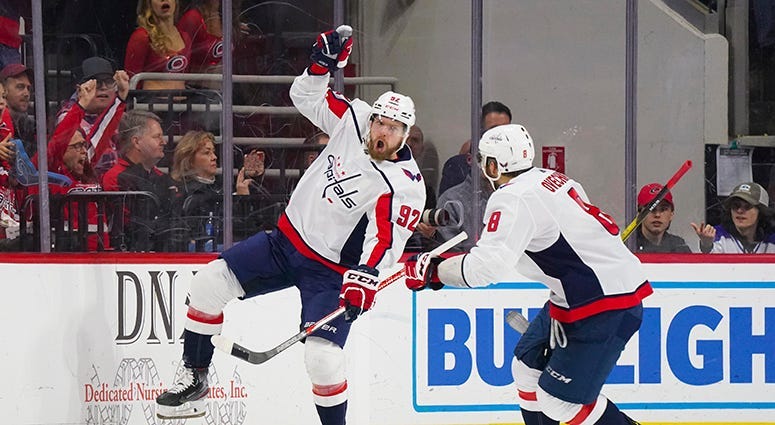 Kuznetsov, 27, started off the 2019-20 season on a sour note, serving a three-game suspension administered by the NHL after testing positive for cocaine use during international play last May, which resulted in a four-year ban announced by the International Ice Hockey Federation last August.
"I think obviously it's a very difficult situation when we go back on it," Reirden told The Sports Junkies during his bi-weekly appearance Thursday, presented by Sheehy Auto Stores.

"When you're handling something like that," he said, "it's obviously a difficult time for the player and you need to be there for him in support, in that regard, but at the same time, you have to hold people accountable and make sure that they understand that's not the standard for what we expect to have here on the Washington Capitals."

"It's a combination of both of those things that have been put into place," Reirden continued. "I think that he had a little bit of a tougher start to the season after not necessarily being in games. He kind of was able to have some offensive success. I think that his face-offs improved initially quite a bit, then had a little bit going through some time where he was battling through some things injury-wise.

"And then now, getting better. His last game, again, face-offs were where they needed to be – well over 50 percent and then scores two goals."

Kuznetsov has netted 15 goals this season and has registered 37 points with 22 assists through 38 games. He's actually well ahead of his goal-scoring pace last season, a down year for him when he scored 21 goals in 76 games, but he hasn't reached the level of play he performed at during Washington's 2017-18 Stanley Cup championship season, when Kuzy finished with 83 points on 27 goals and 56 assists.

"It's important. He's a huge piece for us, so that consistency of play at that level, not just the play with the puck but also the play away from the puck," Reirdedn added. "But definitely looking to score more goals this year, which is important, and he's been definitely achieving. Still a work in progress and he's not on the very top of his game by any means. The consistency of what we saw from him last game is important, that we continue to see that."