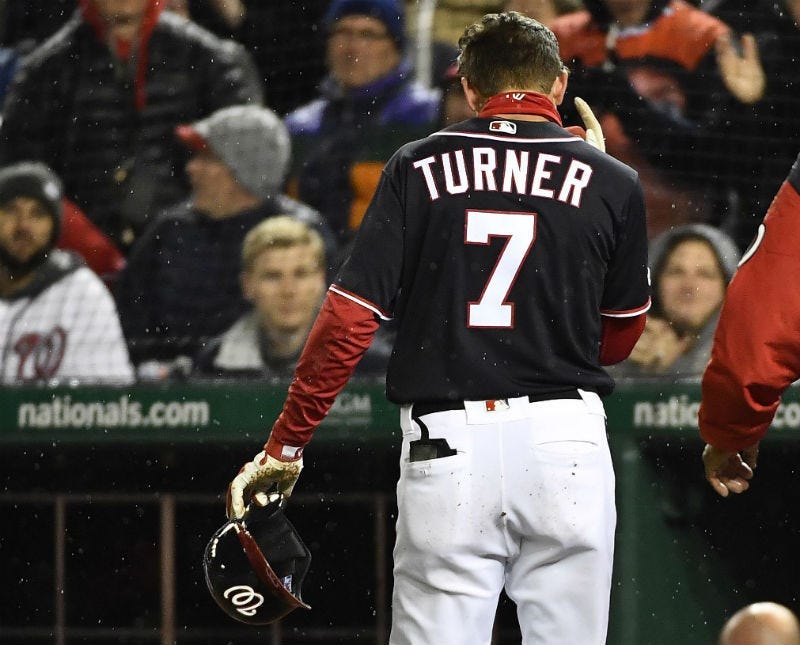 Nationals shortstop Trea Turner was seen taking ground balls and batting pratice at Dodger Stadium Thursday, a sign he could be nearing his return.

Turner has missed the last 32 games since fracturing the index finger on his throwing hand on a bunt attempt on April 2. Broken bones are unique to each person. Everyone heals at their own pace. But Nats GM Mike Rizzo recently established a timetable for Turner, suggesting a late-May return.
Which is why it's so good to see Turner taking cuts in the cage before a May 9 game against the Dodgers.

"I'm actually observing him right now running the bases, from first to second base," Byron Kerr said on 106.7 The Fan. "He did shortstop work at the beginning of BP and then he actually took swings in the cage as well."

"It looks like he has two tiny pieces of tape on his right index finger that was injured, so he looks really, really close to coming back when his Injured List stint comes to and end," he said. "Hopefully in a week or two he'll be able to come back, so that's a very, very good sign."

Juan Soto, who went on the 10-day IL with back spasms on May 4 (retroactive to May 1), was also seen taking cuts.

"And Juan Soto also is going through the paces," said Kerr. "We talked to Davey Martinez before the game as well, and (Soto) looks like he's good to come back on Saturday when he's eligible to come off the Injured List. He's also taking part of batting practice."