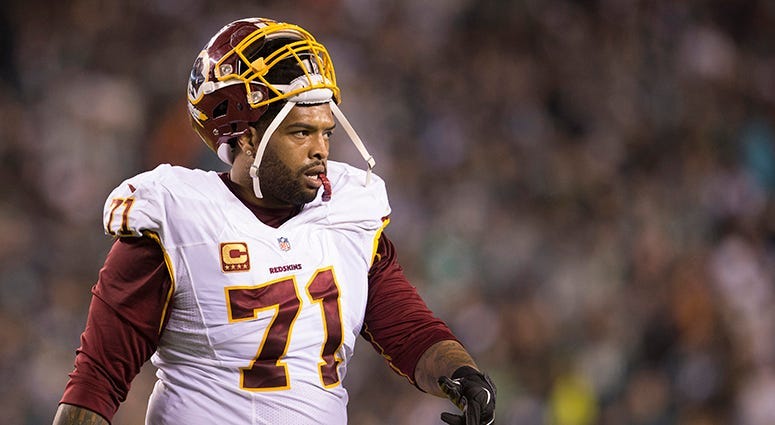 Williams reported to Redskins Park before the NFL trade deadline on Tuesday, ending his months-long holdout, but leaving many questions still unanswered about his future with the organization.

Without passing a physical, Williams cannot practice, and so he did not on Wednesday.

"It was good to get Trent Williams back in the building today," Callahan opened his daily media session. "That was a good thing. We had a good discussion. We visited for a good hour or so, and just shared a lot of thoughts and conversations. Really, that was just an extent of just our relationship in the past."

"Unfortunately, today he couldn't practice. He did not pass the physical," he said. "There was discomfort with his helmet and the fitting of it, so that's where we're at as of today and we'll take Trent's situation day to day."

Will Trent play for the Redskins again? Callahan pauses for a brief moment before saying “I’m hopeful he does.”Goes on to say his heart is in the right spot, but avoids directly answering whether Williams wants to play again for Washington.

If you're looking for Callahan to go beyond surface level in the details, you would be out of luck. Below is a Q&A style recap of the remaining Trent Williams questions, with Callahan's responses in quotations.

So you said there was a discomfort. Is it because of the surgery he had?

"I would imagine so, John. I don't know all the specifics yet, but all I know is that the helmet, it wasn't comfortable. A little discomfort in there. I'm sure it would be a part of the acclimation period in getting him back on the field. That was where it was gonna start anyhow, where it was gonna begin."

Will he need some sort of specially designed helmet?

"I'm not sure yet. I'm gonna leave that to the trainers and the doctors and the equipment manager, and see if they can all get together and formulate a plan of action and go forward from there."

You said that you spoke to Trent for an hour just about everything with your relationship. Can you give us a sense of  what the conversation was like? What your thoughts with him were and what his thought with you were?

"It was a really good conversation about a lot of things. I wouldn't want to disclose that, because it was private. It was just a real positive catch-up type conversation, and just kind of going back and forth on a little bit on our relationship over the years, and how things are going with the team, and where we're headed and how we're moving forward here. That was more of the gist of it."

Just wanted to clarify. There's been previous reporting that Trent passed his physical, and then you said it was the helmet issue today. But you said that that is technically a failed physical, just to be clear on that?

"Yeah, he did not pass his physical today. Yes."

Do you have any kind of timeline of when he can re-test that?

Regardless of whether he passes or not, a physical, do you expect him to ever play for this team again?

"I'm hopeful that he does. I've got a lot of respect for Trent, and what he's achieved here and what he's done. I look at it through the eyes of a player and I've seen the sacrifices that he's made, the work that he's put in when he's here and playing. He's one of the more elite offensive linemen I've ever had the privilege to coach. I've been fortunate enough to be around a lot of them and he has all the ingredients, tools, traits – whatever you want to call it, he has that. He has that makeup, he has that skill set to be really good in this league, and he has been. He's proved that."

Based on that conversation today, do you think he wants to come back and play?

"I think his heart's in the right spot. I think Trent loves football. There's nobody that loves football more, that's into it, that studies the game, that really gets into the matchups and is challenged by the matchups. So there's no question that he has a love and a passion for playing football."

Sorry to continue to parse this out. Was the only reason he failed the physical the helmet issue, or were there other health concerns as well?

"No. That's the only one that I reported, is the one I'm sharing with you."

So if that were fixed, he would be cleared to the practice field?

"Yeah. And, you know, that has occurred and really that's the gist of it, and we're really focused right now on Buffalo in everything we're preparing on the field. That's where our focus is directed."

Was there a reason you guys did not trade him yesterday? I know that was a communicated desire.