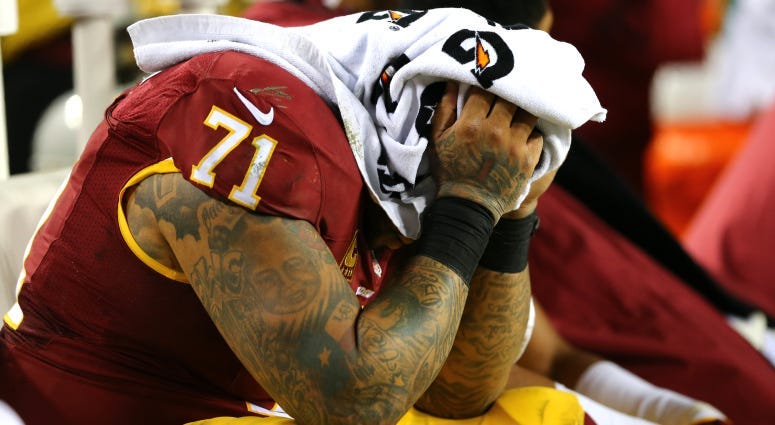 Trent Williams and his agent saw how quickly the Redskins moved on from Quinton Dunbar, and the pair are now demanding the same.

The message emphasizes how patient Williams has been over the past season as well as how he's refrained from pursuing "legal action" against the organization. He states adds Williams will always love Dan Snyder, his teammates, and the Redskins' fanbase, but Williams is demanding to now be traded or released.

He continues to discuss how the two parties have now reached a boiling point and, despite Williams' best efforts to find suitors, Washington was "unable (or unwilling)" to negotiate a trade on his behalf.

This statement comes less than a day after the team traded Dunbar to Seattle for a fifth-round pick. Dunbar was unhappy with his current contract and the team moved on while recouping whatever assets they could.

The new CBA discourages holdouts, enforcing the policy that if a player doesn't report, he loses his accrued season toward free agency, giving the Redskins all the leverage. Since Williams is under contract for the foreseeable future, it doesn't make sense from a front office perspective to not capitalize on a trade.

But, the longer the team waits, the more it risks driving down Williams' price even further.

At this point last year, the Redskins could have easily recouped a first-round pick in a trade for Williams. Then-president Bruce Allen balked at the notion of moving on from Williams, insisting he would return to the field in a Redskins uniform..

In the meantime, the Dolphins sent LT Laremy Tunsil, albeit significantly younger, to the Texans, and netted two first-round picks.

The Browns were interested in acquiring Williams during the 2019 season, per reports, but the conversations were one-sided.

Williams didn't take the field for the Redskins in 2019. His trade value declined and the team got nothing in return because he is still on the roster.

With new brass in the front office, rumors circulated there was a possibility that Williams might consider coming back if the team reworked his contract. Those talks quickly ended and they allowed him to pursue a trade.

From an organizational standpoint, if the offers have been dissatisfactory, it is understandable why the team has been reluctant to accept a lesser trade and has opted to keep holding on to Williams.

This statement from Williams' agent puts pressure on the Redskins to make a move, but with the new CBA rules, they still hold all the cards.

Should they trade him to a team of his choosing if they get an offer that meets their threshold? Absolutely.

But is it worth taking 75 cents on the dollar after all this time? That's up to the front office.