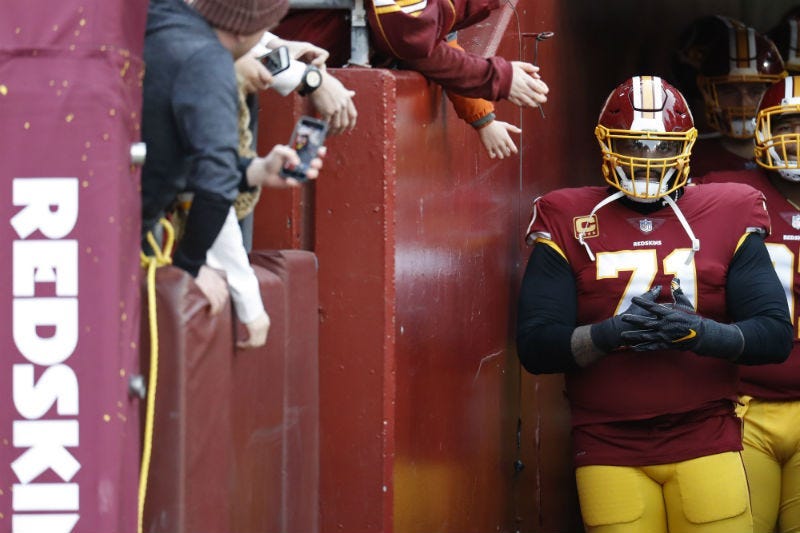 Trent Williams skipped the Redskins' opening day of minicamp on Tuesday. Seems he wants more money and figures his absence might make the team become desperate after watching Ereck Flowers look awful as a fill-in.

Williams is no longer the best left tackle in football, despite coach Jay Gruden claiming as such. Age and injuries have steadily chipped away at the seven-time Pro Bowler. He hasn't played 16 games since 2013, while missing nine games over the last two seasons alone. Indeed, Williams has hobbled his way through the past five years and only played 16 games twice in nine seasons.

That's not the making of a contract extension. Williams is signed through 2020, but earning only $15 million this fall isn't enough. He wants more, given that the market has steadily increased since he agreed to a five-year deal worth $68 million in 2015.

Players should get all the money they can, but should also fulfill their contract like everyone else in America. If Williams didn't want to see others eventually make more money, he should have instead signed one-year deals. Williams chose security and a big signing bonus over staying competitive with the top salaries. It seemed a fair trade at the time, especially for someone who has been suspended over testing positive for drugs.

While Williams wouldn't have been on the field for minicamp after an offseason procedure, he would have been in meetings and around the team's new players. Instead, Williams skipped a gorgeous afternoon when the 2019 edition began its journey.

Gruden confirmed the team has been talking with Williams, though no further details were given. So, the coach bites his lip knowing the Redskins don't really have a plan B. Flowers, who is perhaps the left guard, looked completely confused at left tackle while outside pass rushers continuously raced past him. If this was the regular-season, the Redskins' passer would have rolled right every snap.

Running back Adrian Peterson, a longtime friend of Williams, didn't break the players' code of not criticizing another over holding out. He just said Williams will be ready whenever he reports. But, this team lacks any margin for problems, especially after already losing linebacker Reuben Foster this spring with torn knee ligaments.

The bottom line is Williams has missed 27 percent of the Redskins' snaps over three seasons and turns 31 before training camp starts. That's not a case for an extension, but rather a succession plan. Two more years may be all the Redskins can get from Williams, so they'd be foolish to offer an extension. The team's salary cap is already crippled through next season by injured quarterback Alex Smith's contract. They can't throw away another eight figures annually on an oft-injured tackle.

Washington needs an all-out effort to make the playoffs. It needs Williams to play 16 games. It sure doesn't need dissension within the ranks over money. Williams needs to be a team captain, display leadership and show up at Redskins Park while his agent haggles over a potential new deal.