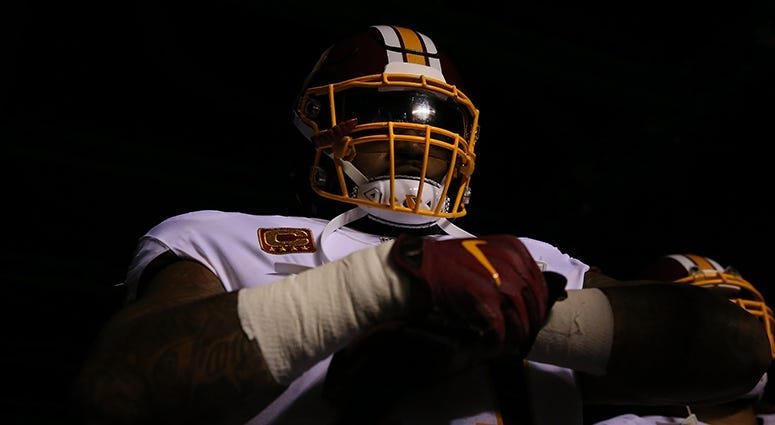 The Washington Post revealed Thursday that Redskins left tackle Trent Williams demanded a trade on June 1. 106.7 The Fan has not yet been able to independently confirm that exact detail, but a source close to Williams said he had been mulling it around that time and "wouldn’t be surprised."

That request was rebuffed by the team as Williams is still a Redskin and currently on the Reserve/Did Not Report list. The Post reported a subsequent request for a raise was also denied.

People on both sides of the standoff have indicated that there haven't been any recent discussions. The team doesn't know what Williams wants, whether that be specifics of a new contract or changes along the medical staff.

The medical issue stems not only from the misdiagnosis of a tumor on Williams' head that was surgically removed this offseason, but the handling of his knee and thumb injuries over the past two seasons.

Frustration from the injuries, their aftermath and a lack of winning boiled over, resulting in the trade request, but the relationship isn't so far beyond repair that the seven-time Pro Bowler is a lock to never play in Washington again.

The team is somewhat confused with Williams' request because they don't know what he wants. A source familiar with their thinking indicated he has not demanded specific changes on the medical staff, and Williams' side has been silent in attempts to negotiate a new contract. A source familiar with Williams' thinking indicated he wouldn't demand to be the highest paid tackle in the NFL, but does want more guaranteed money. He currently has two years remaining on his contract, but next year's $12.5 million base salary isn't guaranteed.

As of now, both sides are dug in. Williams has made nearly $100 million in his career and has taken care of his finances in a way that he and his family are set. The Redskins' reported hope to squeeze him financially with fines aren't yet having an effect, but that could change. The amount of money Williams has accrued in fines, while significant, doesn't equal one of his game checks. Those start coming Week 1. As of now, Williams is telling friends he's prepared to sit out the season.

However, Williams still isn't ready to play football yet. The cosmetic surgeries that were required to fix his head limited his ability to workout in the offseason. While Williams is in Los Angeles rapidly getting into shape, he isn't there yet. When he is ready to play, his competitive nature could certainly kick in and his stomach to hold out could change.

Williams is also notoriously loyal. The reason he played in 2017 on a severely injured knee is because he didn't want to let down his teammates, or the only organization he's ever known. While he is upset with the organization, it won't be easy for him to miss games.

It won't be easy for the Redskins either. Donald Penn is a nice signing to add depth, and Geron Christian, Sr. has looked leaps and bounds better than last year in his limited action. But neither are Williams. Almost no one is.

For now, there is no looming deadline. Week 1 is still over a month away, however the silence of both sides seems to be doing damage. A relationship that was fractured but not irreparable is suddenly trending that way.