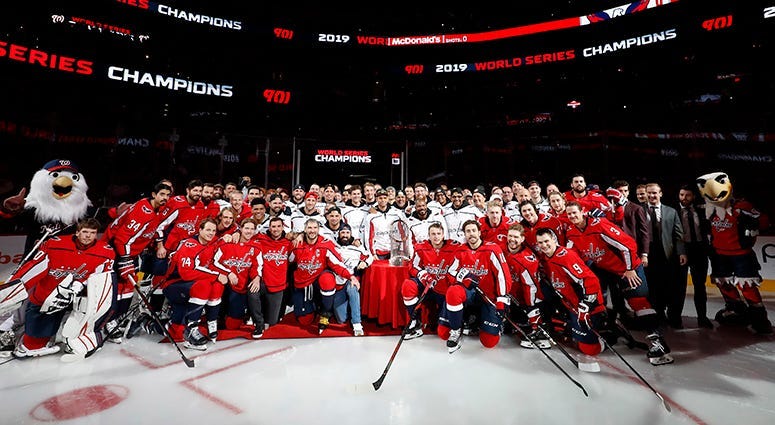 The World Series champion Nationals were the Capitals' guest of honor Sunday night at Capital One Arena.

The champs made their presence known, most notably with their shirtless Zamboni ride around the rink during intermission of the Caps' 4-2 win over Calgary.

The Nats and Caps capped off their fraternal night together with an epic team photo, centered around the Commissioner's Trophy on the ice.

THE CHAMPS ARE HERE. (No, we’re not getting tired of saying that.)
A post shared by Washington nationals (@nationals) on Nov 3, 2019 at 4:29pm PST
It was a night neither team will soon forget. The Capitals were just happy to finally return the favor.
"That was special. Very special. A special week for them," Caps center Lars Eller told The Sports Junkies during his weekly appearance, driven by AAA.

"I think it was great that we can enjoy these things together," he said. "Like, we got a little bit of that when we won, and we went to their game and their clubhouse. It's nice to be able to return the favor and we had a great time before the game, and during the game and after the game against Calgary."

"Every time I looked up on the Jumbotron, you saw the guys really enjoying themselves up in the suite," he recalled. "They deserve all the praise and the recognition that they get right now."

Eller also spoke on a recent article in The Washington Post about the work he put in this summer with a local skating coach, Wendy Marco, to improve on his skating technique.

"I think it was more adding and improving my skating more than anything," Eller told The Junkies. "Wendy I think has been working for a couple of decades with hockey players locally. I think she's even been working with some guys on the team that you probably might just not have known about going way back, a small number of players."

"And so this goes mouth-to-mouth," he said. "The player and 'there's this woman that you can work with on it.' I said okay, I'll take a chance on it and see if she has some valuable stuff she can teach me, and we worked together this summer. I was looking at ways to improve my skating, because I still think there is room for me to improve in certain aspects.

"I didn't read the article, but I think I said something like you get to a point in your career, now I'm 30, and you're probably not gonna get a lot stronger, but you're gonna get wiser and more experienced. But there's still things in your game you can keep working on to gain another advantage or get better. And I think for me, the skating part is an easy one so you can improve a little bit in the offseason, if you put the time in."

Eller's appearance begins at the 31:15 mark below.