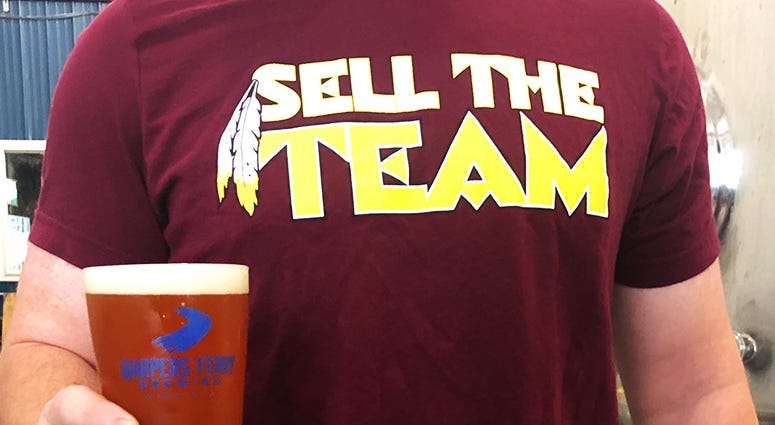 Starting this week, Redskins fans can get inebriated off the dream of Dan Snyder relinquishing his 1-8 football team with Harpers Ferry Brewing's "Sell The Team!" IPA.

"Tomorrow will be the release of Sell The Team!" the Purcellville, Va.-based brewer writes in a Facebook post promoting its new offering. "This double west coast IPA finished at 9.5% to get you through another dreadful Sunday. Bitter and slightly disappointing like a day at fedex field!"

At publication time, Harpers Ferry Brewing's post had been shared over 160 times. Jesse Powell, Director of Brewing Operations for Harpers Ferry Brewing, is a lifelong Redskins fan, whose basement has burgundy walls and gold ceilings, but stopped attending games after witnessing Robert Griffin III tear his ACL in Washington's loss to Seattle in the 2012 Wild Card round.

"The last game I went to is when he blew his knee out against the Seahawks in the playoff game," Powell told 106.7 The Fan. "Wasted a bunch of money on that and never went back."

"I will not step foot in FedEx Field ever again," he said. "I've flown to Dallas to watch games there before I go to FedEx Field."

As for their 'Sell The Team!' brew, which will be available on site starting Wednesday, Powell said, "We just basically tried to go for the biggest bitter double IPA that we can go for."

"It finished at 9.5 percent," he added, "so hopefully you can't remember the game on Sunday."

Under normal circumstances, describing your own beer as "bitter and slightly disappointing" might not be the most sound business judgment. 'Sell The Team!' is still a good beer, Powell assures, but it has its own layer of Redskins dysfunction baked into it. Harpers Ferry Brewing went with a West Coast IPA, a less fashionable style of brew in the beer community at the moment.

"The West Coast IPAs nowadays, they're not mind-blowing like how they used to be," said Powell. "It's like the New England IPAs are really the trend now, so we kind of went with 'slightly disappointing' because it's not what's really trending nowadays in the beer community. It's still a really good beer, but it was just kind of a little shot that I could take at the Redskins."

Kind of like pounding the football 25 times a game while the rest of the league is setting passing records.

Operational since Sept. 2018, they've brewed 60 beers to date and keep up to 20 beers on tap, their four core beers along with a seasonal mixture. Harpers Ferry Brewing offers a scenic overlook of the Potomac River and, off in the distance, Harpers Ferry, West Virginia.