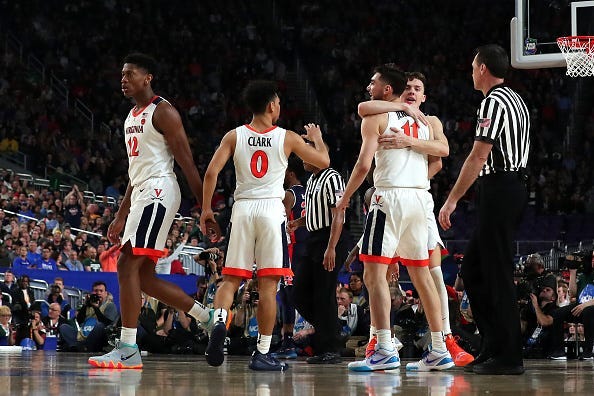 Don't expect many points in Monday's NCAA Tournament final between Virginia and Texas Tech. The over/under is currently set at 118 for a matchup featuring two defensive juggernauts.

And watching from home may require some patience, according to Chris Knoche.

"It's gonna be tough to watch this for stretches," Knoche told The Sports Junkies Monday morning. "I don't know that this is the game that CBS wanted, but it's the game they got. And these two teams deserve to be there, without question."

Both UVA and Texas Tech rode their defenses to the national title game, the Cavaliers allowing a Division I-best 55.5 points per game, the Red Raiders not far behind at 58.8 (No. 3 in Division I). But on current form, Knoche gives Texas Tech the edge.

"I thought the two best offensive teams coming into the tournament were Michigan State and Gonzaga. And all Texas Tech was just completely shut them down," said Knoche. "Michigan State could get nothing for a stretch of about 10 minutes in the second half."

"And for all the stuff that Michigan State runs — they run great sets, great continuity stuff, they're just really at another level offensively — and Texas Tech just put them in their hip pocket. That's as impressive a performance right there as you'll ever see on a national semifinal stage."

But after two nail-biting wins in the Elite Eight over Purdue and the Final Four over Auburn, many see UVA as the team of destiny.

"The things that had to go right for them in the last 10 seconds of the game for them to win, these were like two and three percent propositions that you're talking about," Knoche told the Junkies. "And yet somehow, someway, they find a way to get on the right side of the scoreboard. It's an amazing thing."

"I guess you could look at it one of two ways: either they're the team of destiny, or their luck is due to run out at some point in time. It ran out for Duke after two close wins, and we'll see what happens tonight."

The key to what's sure to be a defensive brawl for the national championship? If one player on either team can put in a special offensive performance, Knoche says.

"If you get a guy on either team that has that breakout night offensively. Breakout for these two teams might be 20 points, 22 points, something like that."

"Is it gonna be (Kyle) Guy? I think (Ty) Jerome's been critical to Virginia's success ... he's handled pressure, he's made shots, he's made plays and he's a better defender than he looks like he should be."

"The question I have is: is somebody on Texas Tech — and they've got a lot of candidates — gonna be able to step up and be that breakout guy where they're getting 20, 22 points. Because points are gonna be at a complete premium in this game."