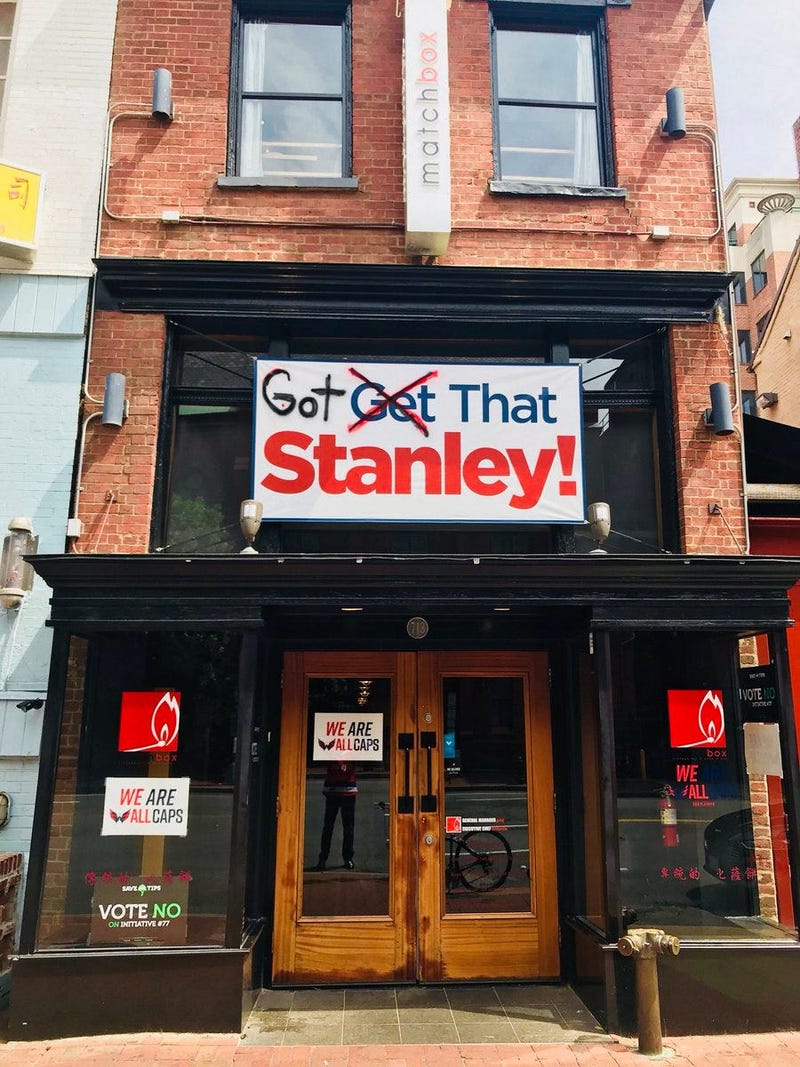 Get That Stanley started as organically as any movement born on sports-talk radio does.

It was 2015, and after a riveting seven-game opening-round series victory over the Islanders, the Capitals had once again found themselves in a position which had defined Alex Ovechkin's career all too well to that point. Up 3-1 over the Rangers, the Caps now had to put them away.

"Hey man. I gotta go with the Caps as the realistic ones, man. They're playing real good hockey right now. I'm still a little scared, if we get through New York, playing the Lightning or whatever. But from the look of it, if we do get that Stanley, go to the Stanley Finals or whatever..."

The Junkies seized on the comedic moment, and that one little slip-up -- 'Get That Stanley' -- would be replayed on the show again, and again, and again and again. It became somewhat of a rallying cry, one which would bond The Junkies to Caps fans who also listened to the show.

Remixes were made, with 'Get That Stanley' dropped alliteratively into songs which happened to feature the word 'get.'

But, inevitably, it transformed back into the same punchline it was in its infancy.

The Capitals would ultimately lose that series to the Rangers -- dropping three straight, two on the road -- culminating with a bitter Game 7 loss at Madison Square Garden.

They would not Get That Stanley the next year, either, or the next, and were eliminated by Pittsburgh in the second round of consecutive playoffs  -- in six and seven games, respectively -- leaving a bitter aftertaste to a once excitable 'Get That Stanley' movement.

Well, I'm here to tell you the Capitals finally Got That Stanley, and it couldn't taste any sweeter. And the Get That Stanley movement is rightly reinvigorated, albeit with a slightly different spin.

Here's what Matchbox looks like now with their #GetThatStanley sign... @JunksRadio has influence EVERYWHERE. A sign around a city based on a radio caller that 99.9% of radio hosts would have not even noticed. pic.twitter.com/g47aGwWbMX

our highlight of the year...getting to do this yesterday. #ALLCAPS ---- pic.twitter.com/Uh1sCygsig

Thanks for keeping it #ALLCAPS @matchbox369 ! #StanleyCup pic.twitter.com/l9A48pKRPN

-- #ALLCAPScelebrate with us decked out in your caps gear + enjoy 10% off your bill through sunday. pic.twitter.com/QO0b7YBIq1

thank god for the change of narrative... #GotThatStanley

Hi we did it #GotThatStanley

I love this city, I love this team, I love everyone!!! #LetsGoCaps #ALLCAPS #GotThatStanley pic.twitter.com/svhjqt5eDc

#GOTTHATSTANLEY DMV IS GOING TO BE POPPING....

On behalf of @DCVMUG and it’s @MyVMUG members, we’d like to congratulate the @Capitals on their first #StanleyCup #GotThatStanley #ALLCAPS pic.twitter.com/tYzBVTlk5c

@EBJunkies @JunksRadio No victory buns, but the wife did say "set the alarm for 6 AM so we can watch the Junks." Been watching ever since. #ALLCAPS #GOTthatstanley

My guy @JonDepompa gave me the goose bumps when he called into @JunksRadio earlier. Naming the #ALLCaps legends was pretty cool. #GotThatStanley #STANLEYCUP

I was presenting to a Canadian audience on Risk and Uncertainty on Wednesday and snuck the below prediction onto the bottom of one of the slides. The @moneymetalcakes reverse jinx worked! (Got the VGK 3 goals part right...) #GotThatStanley pic.twitter.com/hFGdfWsLmA

...Caps earned it the hard way and deserve their time in the spotlight. What happens in Vegas comes back to the District of Columbia!! #GotThatStanley

Got that Stanley! #AllCaps #StanleyCup pic.twitter.com/OtMjme1MoX

Congrats to the @Capitals ! Finally got that Stanley cup

Yes!!!! We got that Stanley!!!! pic.twitter.com/zAVEqLFcgU

Got that Stanley!!! #ALLCAPS pic.twitter.com/gGtyriD5D4

We got that Stanley pic.twitter.com/sFaoYCWZ0m

Hey @JohnCarlson74 6 years ago you signed my jersey & tomorrow I will get to wear that same jersey in celebration bc WE GOT THAT STANLEY BABY! See you tomorrow ❤️ pic.twitter.com/sZ7QKWVoyh

As I shouted at you GOT THAT STANLEY

I’ve waited my whole life for this --❤️ GOT THAT STANLEY!!!! #ALLCAPS #StanleyCupChampions pic.twitter.com/JPtYgoeU6B