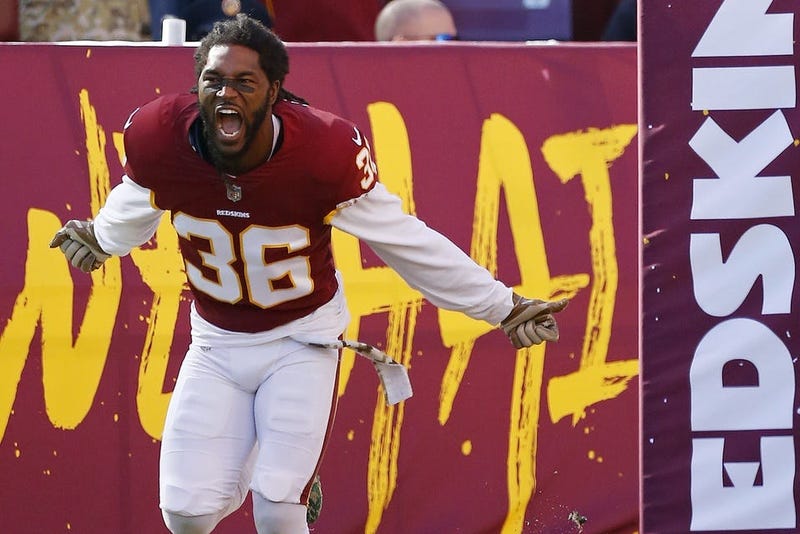 December 24, 2018 12/24/2018 6:33 pm
D.J. Swearinger revealed he was released by the Redskins on 106.7 The Fan's Grant & Danny Monday following comments he made to the media regarding defensive coordinator Greg Manusky's play-calling after Washington's loss to the Titans Saturday.

And while these were the comments that finally doomed Swearinger in D.C., so to speak, he had a habit of publicly criticizing various aspects of the team throughout his two seasons with the Redskins.

It started last season following a 38-30 Week 10 loss to the Vikings, when Swearinger said he thought practice on the Friday prior to the game "wasn't good enough."
Swearinger brought up problems at practice again a few weeks later after a Week 14 loss to the Chargers, telling reporters: "If you don’t prepare well, you’re gonna fail. I don’t think we prepared well ... we’re not prepared. It’s all of us: players and coaches. So, we’ve got to be more prepared."

The pattern continued into this season, Swearinger sounding off after an embarrasing Monday night loss to the Saints.

"You come to work, it means business," Swearinger added during an appearance on Grant & Danny the next day. "And, truthfully, if it doesn't mean business to you, as a leader on the defense, I would rather you not even come."
The safety was also one of several players to comment on poor attendance at Redskins home games, telling The Fan's Grant Paulsen and Danny Rouhier after a road win against Tampa Bay: "I would rather play on the road."

"Home games, that's some of the worst things I've seen," Swearinger went on to say. "I've played on four different teams. Never seen it that bad, you know with other teams' jerseys in the stands, with the boos, whatever it may be. I've never been a part of nothing like that."

A few weeks later, Swearinger was back to criticizing teammaters for not practicing hard enough before the Thanksgiving loss to the Cowboys.

"That laughing s---? That s---'s for the birds when you losin'," Swearinger told reporters. "If you losin', if you ain't no championship team man, it ain't no reason coming into the building unless it don't mean that much to you."
He doubled-down on these remarks the following Monday on Grant & Danny, calling Friday practices and Saturday walk-throughs "a joke."
Some believed Swearinger was calling out his coaches with those comments, but he clarified on Instagram the next day those comments were "strictly for players!"

However, after a 40-16 loss to the Giants, Swearinger appeared to insinuate something was wrong with the play-calling.

"I've been saying that for two years, man. Obviously, they didn't listen," he told NBC Sports Washington. "I can't tell you what needs to change. I'm not the coach."

Swearinger was more tight-lipped during his Monday appearance on Grant & Danny, but he alluded to several play-calling changes he thought would help, such as bringing more safety pressure.
"I don't know, man, whether I was talking about the frustration or whether something needs to change," he said. "I mean, I don't know. But I know we have a lot of talent on the defense as players. We've got some defenses that we can call that we can be in that we can show our talents."

But then on Saturday came the straw that finally broke the camel's back, and there was no mistaking this time to who and what Swearinger was referring.

“I feel like we should’ve been more aggressive,” Swearinger said about the late game play that ended in an illegal contact call on Fabian Moreau. “Feel like in 3rd down and six playing a backup quarterback why would you put us in man-to-man? We’re at our best as a defense when we have our eyes on a quarterback. When you go one high on a backup quarterback? That's easy man! They gonna go backside every time. It’s a bad call. It’s a horrible call. You don’t put Fabian in that situation on a backup quarterback. Regardless of the call, the ball was overthrown. But I just feel you put us with our eyes facing the quarterback with all the talent we have on the back end, we could dominate every team every week.”

“If I’m the d-coordinator, I’m calling zone every time on 3rd down every time cause you got a backup quarterback,” the safety said. “Make him beat us. Make him (think), 'Oh okay, it’s zone. Go here.' I’m gonna go pick you off. If it’s man, 3x1, you’re going back-side every time. A kindergarten quarterback knows that man.”

Wherever Swearinger signs next, it will be his fifth team in six NFL seasons.