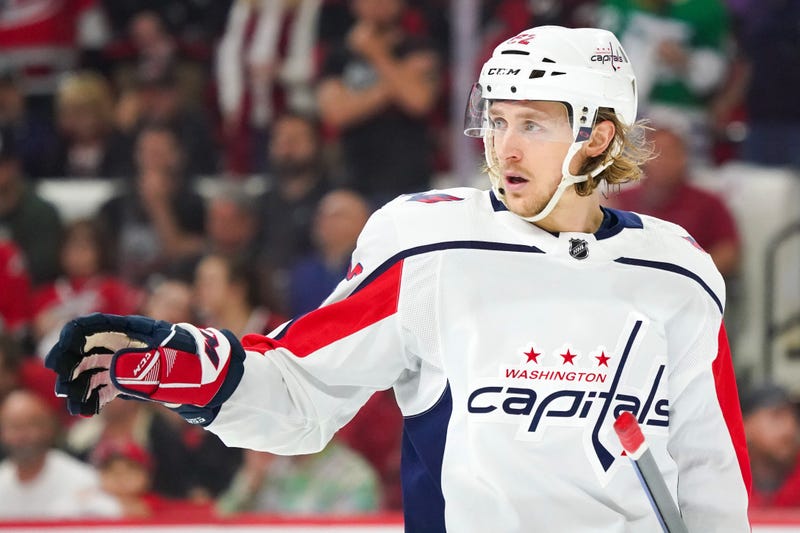 The Capitals made their second big move of the weekend on Sunday, Father’s Day, as they re-signed a guy who used to be their “daddy” when he was wearing Penguins colors and even a Rangers sweater.

No more. Carl Hagelin, 30, was re-upped by the Caps on Sunday to a four-year, $11 million deal with a salary cap average annual value (AAV) of $2.75 million.
Washington acquired Hagelin before the trade deadline from the Los Angeles Kings, who had earlier acquired him from the Penguins. General manager Brian MacLellan paid a third-round pick and a conditional 2020 6th round pick for Hagelin on February 21. Because the conditions of that extra pick were not met, the Caps do not have to surrender that selection and they retain the player they wanted long-term.
“We are pleased to have signed Carl to a new four-year contract,” MacLellan said via a team press release. “Carl is a versatile player who can play on any line and is an excellent penalty killer. He is a proven winner (two Stanley Cups with Pittsburgh) and provides great leadership to our team.”

In 20 regular season games with the Caps, Hagelin had 11 points (3 goals, 8 assists). He had just one assist in the playoffs and was a minus-one overall in the Caps' seven-game series against the Carolina Hurricanes.

Hagelin averaged 2:21 per game on the Caps penalty kill unit, which led Washington forwards in that category following the trade, and Washington killed off 88 percent of the Hurricanes’ power play chances in their playoff series loss.

Hagelin did his job. Now he gets the reward.

Ideally, the Capitals probably would have liked to go three years with Hagelin instead of four, but that would have raised the AAV to $3.66 million if the cash value had remained the same. Teams — and the Caps are no stranger to this — usually spread out a contract by one extra year to lower the cap average cap hit.

If the Capitals were to give up on Hagelin in the final year of his deal, they only have a base salary of $1.8 million and no bonus to dump off on another team, which makes it easier to deal him.

The Caps' other big move of the weekend saw them acquire Radko Gudas for Matt Niskanen and save a bunch of cap space short and long-term.

In a nutshell, the Caps saved about $3.4 million in cap space in 2019-20 and for now, all $5.75 million of Niskanen’s contract in 2020-21, which they then invested in Hagelin and still save money. In other words, the Caps traded Niskanen and a third-round pick for Gudas and Hagelin, plus still trimmed some valuable cap space.

That’s crucial because the first order of business figures to be a multi-year deal for restricted free agent (RFA), Jakub Vrana. If the Caps handle business with the 23-year old Vrana as they have with Tom Wilson, Evgeny Kuznetsov, Dmitry Orlov and others who were RFAs at the time, it should be a four- or five-year deal worth about $5-6 million in AAV.
If my guess is right, the Capitals would have roughly $5 million in cap space, assuming they get a deal done with Vrana first. Per CapFriendly.com, as of Sunday night after the two transactions, the Caps have a reported $10.7 million in cap space left.
What would that mean for Brett Connolly? The 27-year old unrestricted free agent is coming off a career year with 22 regular season goals and two more in the playoffs. It’s hard to see a situation where he doesn’t get a new multi-year contract offer for anything less than $4 million per year.

If the Caps choose Vrana first, as they should – he’s obviously younger, faster, and has more high-end skill – it’s almost impossible to see a scenario in which the Caps can match an offer for Connolly. He would likely be gone, which would open up a third line right wing spot.

It’s also possible that another restricted free agent, Andre Burakovsky, would not be brought back as well. The 24-year old is an inconsistent but talented winger and finished the 2018-19 season strong, but has been up-and-down during his career. He’s arbitration eligible and made $3 million last year, so if the Caps were to bring Vrana and Burakovsky back, it would likely eat up almost all, if not the entirety of, their cap space.
That also leaves Devante Smith-Pelly in peril as well. He’s an unrestricted free agent and doesn’t figure to return after he was waived and sent to Hershey as part of the original Hagelin acquisition.
Chandler Stephenson, another RFA, can play all three forward positions and best fits in with the fourth line, assuming he’s re-signed to a one- or two-year deal.
The overall lean here is that the Caps choose to move forward with Vrana and Stephenson while letting Connolly, Burakovsky, and Smith-Pelly go so that they can still have some cap space and possibly work on extensions for Nick Backstrom and possibly Braden Holtby, who are unrestricted free agents after this upcoming season.

They would also be able to possibly bring in a cost-friendly veteran forward to fill out the top 12 spots, as they did with Nic Dowd last year. It’s probably wishful thinking, but a versatile forward like Micheal Ferland from Carolina or Derick Brassard, last of Colorado, might be a fit. Or how about Justin Williams making his return?

Wouldn't that be ironic after all that's happened?

Either way, it appears the Caps are smartly managing their limited resources and improving their team in the long run with these two moves.