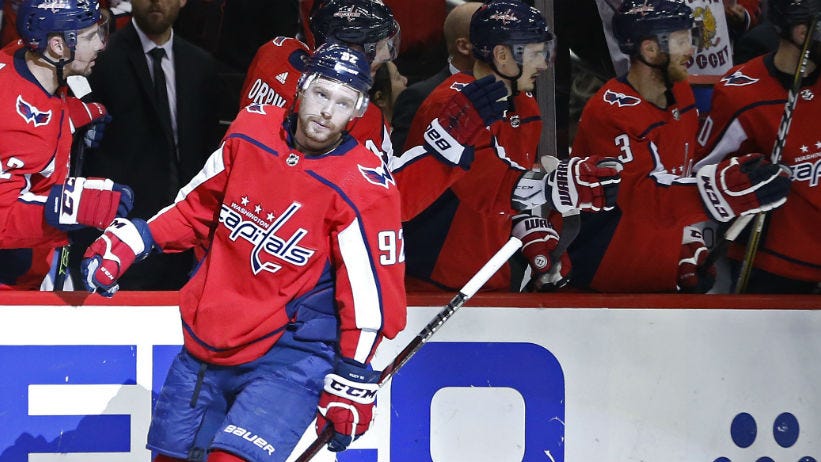 After denying illegal drug use earlier this offseason, Washington Capitals forward Evgeny Kuznetsov tested positive for cocaine and was suspended by the International Ice Hockey Federation for four years.

The NHL released a statement acknowledging they are aware of the failed test but said they wouldn't make an announcement on any further action until Kuznetsov and NHL Commissioner Gary Bettman meet face-to-face before training camp begins Sept. 12.

Kuznetsov said he will accept the penalty and said he would work to win back the trust of his fans. In a statement, the Capitals said they are committed to ensuing Kuznetsov has "the necessary support required to work through this situation."

This leaves the Capitals in a difficult spot. What should they do about their talented forward?

"If I could, on the first day of the buyout period next year, I would buy out Evgeny Kuznetsov," Tom Daly of Crashing The Net said on The Sports Junkies.

Kuznetsov has six years remaining on an eight-year, $62.4 million deal he signed with Washington before the 2017-18 season. A buyout would give the Capitals more financial flexibility heading into free agency during the 2020 offseason. The Caps would lose $14.9 million to buy out Kuznetsov in June 2020, per capfriendly.com.

"I would just, as a team, if I was a team trying to move forward especially given the situation they're in where they need to get a deal for Nicklas Backstrom, need to find a way to get Braden Holtby back in a Caps uniform for the future past this year," Daly said Friday. "I would take that as, I'm not going to commit so much money to a guy who has already been dishonest to us for this entire situation, even though he has volunteered to go and get treatment."
In May of 2019, after a video appeared showing Kuznetsov next to lines of a white powder from summer 2018, he denied he ever used drugs.

"I have never used drugs and I am not going to get involved in this. If I have questions, I am ready to undergo a medical examination at any time," Kuznetsov said in a statement in May.

And after he was cleared by the NHL, Kuznetsov said in a statement on May 31, "While I have never taken illegal drugs in my life and career, I would like to publicly apologize to the Capitals, my teammates, our fans and everyone else, for putting myself in a bad situation. This was a hard lesson for me to learn."

According to the IIHF, "the prohibited substance was found in a doping control which occurred on 26 May."

The NHL does not suspend players automatically for testing positive for cocaine, something the league considers a drug of abuse, not a performance-enhancing drug. However, a positive test may result in "intervention, evaluation and mandatory treatment can occur in appropriate cases." This could mean Kuznetsov misses time for the Capitals.

"(Mandatory treatment) where he would have to go and get better before he could play as NHLer, so that's really suspending someone without saying it," Daly said. "If the NHL says, 'You can't play until you're better,' who knows how long that could be? And who knows when it starts?"

Daly said the NHL's system has worked in the past for players with drug issues, but each individual case is different. And, to Daly, counting on a Kuznetsov is not worth the risk for the Capitals.

"As a business, you should probably look at moving forward and taking care of the players that you need to take care of like Nicklas Backstrom, who to my knowledge has never hurt a fly or the team in any sort of way," he said. "It's not worth the risk to me at this point."