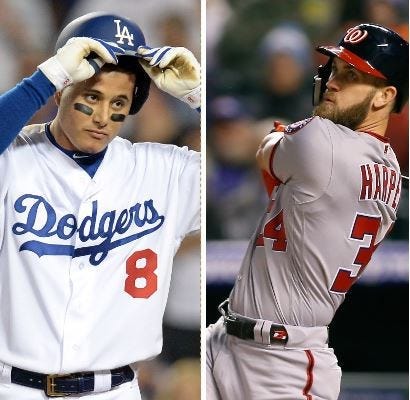 The Cubs have long been thought of as a possible destination for Bryce Harper, given the franchise's storied history and his friendship with Kris Bryant.

But according to Jon Morosi, the other Chicago team is interested in signing not only Harper, but Manny Machado, too.

#WhiteSox interested in *both* Manny Machado and Bryce Harper, source confirms, although it’s too early to know how realistic it is for them to sign either. #WhiteSox have second lowest current 2019 payroll commitment of any @MLB team. Story: https://t.co/vSXgIqh3VL @MLBNetwork

"At present, the White Sox have the second-lowest payroll commitment of any MLB team for 2019," Morosi wrote in his MLB.com story Monday on the market for Machado and Harper. "With Jose Abreu entering his final season before free agency, the White Sox need a new face of the franchise."

And according to Morosi's sources, they want two.

For whatever it's worth, Harper posted a picture of himself wearing a Chicago Bulls hat on his Instagram story Friday.
Instagram: @bharper3407

In addition, and perhaps more concerning to the Nationals, the Phillies reportedly have not only the interest, but the ability to bring in both superstar bats.

"For years, the Phillies have looked upon this offseason as an opportunity to add a franchise hitter," Morosi writes. "In fact, they have the payroll capacity to add two, if the market breaks in their favor."

Philadelphia making such a huge upgrade to its lineup would have a major effect on the outlook for the NL East. The Phillies would immediately jump to the top in most people's minds, and after the Braves' surprise run to the division title last year, the Nats would most likely be seen as a sizeable underdog.

In fact, Morosi sees Atlanta as a "fallback option" for Harper, Machado or both.

As for the rest of the market for Harper, Morosi says the Dodgers, Giants, Rangers and Angels could try to lure the slugger out west.

Of course, the Nats would love to bring Harper back to D.C., and he's expressed interest in doing so, but it appears they have plenty of competition.
Follow Josh Luckenbaugh and 106.7 The Fan on Twitter.