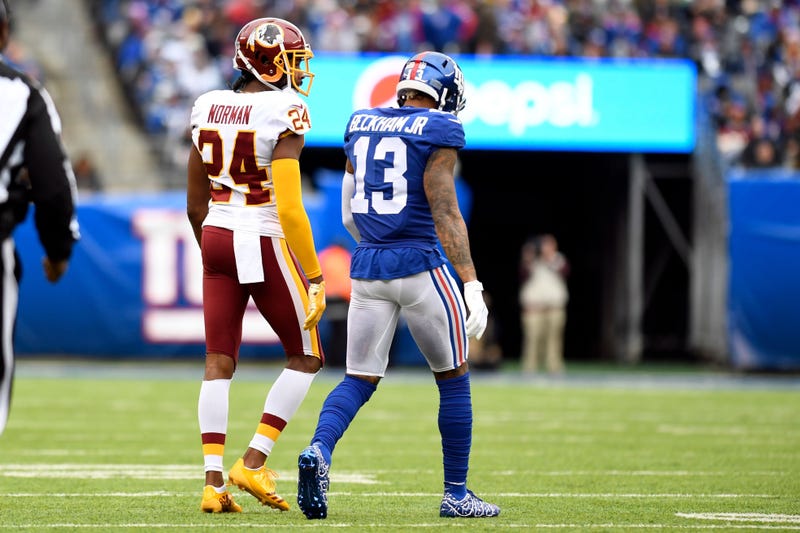 The Redskins have been without one of their top corners in Quinton Dunbar for two straight weeks.

They've managed to escape with two division wins while holding both the Cowboys and Giants to under 300 passing yards. All while depending on rookie Greg Stroman – a seventh-round draft pick – to guard their opponents' top receiving threats.

They've gotten by, even as Stroman has gotten burned deep, twice, badly – on a 49-yard touchdown pass last week to Dallas wideout Michael Gallup, and Sunday on a 44-yard pass to Odell Beckham, Jr. in the first quarter.

Which begs the question: Why isn't Josh Norman traveling with the top receivers?

Redskins safety D.J. Swearinger couldn't come up with an answer to the question during his weekly appearance with 106.7 The Fan's Grant Paulsen and Danny Rouhier on Monday.

"Am I crazy for thinking (Norman) should follow Beckham?" Paulsen asked.

"No, you're not crazy at all," Swearinger said. "Ever since I've been in the league, on every team I've been on, the top guy always traveled. (Johnathan Joseph) traveled in Houston. (Patrick Peterson) traveled in AZ."

The Redskins secondary faces its toughest test yet next Sunday against the Falcons. Atlanta has three imposing receivers in Julio Jones, Calvin Ridley and Mohamed Sanu, a trio that's not so easy to game plan away.

"They have three No. 1 receivers on their team, so we definitely got our hands full matchup-wise," he said. "I feel like we can do some things in the film room to help us eliminate those big names though. Film study can take you a long way, regardless of what position you're in. So if we study the film and just understand what they like to do with each of those guys, we can eliminate a lot of the hype."

But the question still stands, and so far no one on the Redskins has been able to provide a reasonable answer.

"My rookie year, (Joseph), he traveled," Swearinger said. "Not the second year when we got (Bill) O'Brien, he didn't, but my first year with (Gary) Kubiak, he traveled. Pat traveled.

"All I remember from my coaches my rookie year is him saying, 'D.J., why are you leaning on J-Joe's side? We pay him the money to make plays, so lean somewhere else.' So ever since my rookie year, that's always been in my head about corner. I'm gonna take the best guy regardless of what anybody says. When we play certain tight ends, I'm gonna take that tight end. There's no question. I don't know. We'll just have to figure it out."