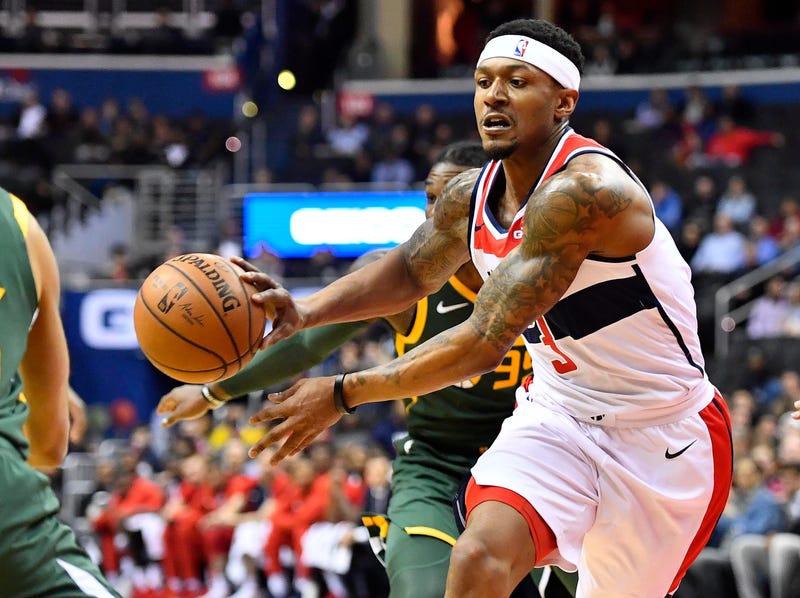 People are making too big a deal about Bradley Beal's minutes on the court this season, says Wizards coach Scott Brooks.

Beal has had to step up demonstrably in the absence of John Wall, which has given way to Beal – someone who was once said to be on a minutes restriction for the rest of his career because of bouts with stress reactions – now leading the NBA at 37.6 minutes per game. Those added minutes have also helped Beal reach another level this season, setting career-highs in points, rebounds, assists and steals.
"If he plays two less minutes a game, he's probably outside the top-ten," Brooks told The Junkies during his biweekly appearance, presented by Greenberg & Bederman.

Brooks is cognizant of concerns for Beal, but stresses the issue is more about load management, which expands beyond just minutes on the court and the team is keeping a careful eye on.

"It's about load," Brooks said. "I believe in the analytics with the minutes, but it's really, more importantly, the practices, the shoot-arounds, the stuff you do before the games, the stuff you do after the games. That's the stuff that adds up to wear and tear your body."

"My staff has done a great job of really handling that and monitoring that," he said, "and putting him in the best position to play as many minutes as we need. Guys, he's 25 years old. I mean, we're talking 37 minutes.

"You can look at all the best players in the league, in the history of the league. I'm not defending myself – it's 37 minutes. But Michael Jordan, if my numbers are correct, when he was like 39 or 40, he played 39 minutes a game and he played just about every game. Allen Iverson, who was a little guy but had the heart of a champion, played like 43 minutes just about every night."

"I mean, I'm not discounting the grind of an NBA season," he continued. "But, to me personally, I think it's an insult to their real world. We live in a very different world, being in the professional business of being an athlete. I was a player and now I'm privileged enough to be a coach, but it's an insult to the real world that we think that, 'Oh man, these guys are... it's another minute or two.' I understand what people think. It's the world that we live in."

"One, Brad loves to play," he said. "Two, he's tough as nails. Three, he wants to keep competing to help put us in a position to be in the playoffs or make us competitive every night, so I honor that. I admire that in him."

"I just think people want to make a big deal out of everything," Brooks went on to say. "I don't get it."

"This is fun," he said. "It's definitely tough. These guys put themselves all summer long to put themselves in a position to compete every night, but they understand this is fun. We get to do something really fun every single night, and if you're lucky enough and you're good enough, you can do it for 35 to 40 minutes. If you're just solid, you do it for 15 to 20."