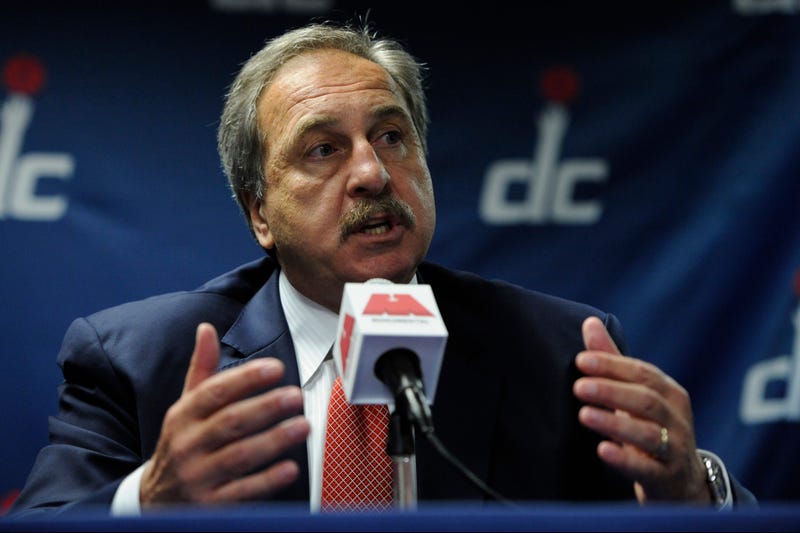 May 4, 2018 05/04/2018 8:30 pm
The Wizards gave yet another silent, purposely-kept-from-the-public contract extension to Ernie Grunfeld some months back, this one broken by Candace Buckner of The Post, which will keep the 15-year Wizards executive employed through at least the 2018-19 season.

As Buckner notes, only four NBA executives -- Miami's Pat Riley, San Antonio's R.C. Buford, Dallas' Donnie Nelson and Boston's Danny Ainge -- have longer tenures as general managers of the same team. All four have won at least one NBA title in that span. Grunfeld's Wizards, in eight playoff appearances since 2003, have yet to make it out of the second round.

The news set off 106.7 The Fan's Danny Rouhier, a long-suffering Wizards fan, who teed off on team owner Ted Leonsis on Friday, in a rant highly worth a full listen and then perhaps a re-listen.

"So Monumental Network, apparently as a matter of policy, doesn't announce these sorts of things," Rouhier began. "You hide behind that policy and your policy's bad. When the Redskins make an announcement, at least, 'Doug Williams has been promoted to...' whatever their version of GM is. People can criticize it if they want to, but at least there's a public announcement. Hiding behind policy is cowardly."

"This is a disgrace. This is shameful. This is embarrassing," he said. "This is something that Wizards fans -- the few of us that are left, that actively care what goes on with this basketball team -- should feel insulted by. Just yesterday, I found a Twitter exchange between Ted Leonsis and a fan, who asked him when he would take management seriously. Ted's response: 'When you get more followers.'"

When you get more followers..

"Maybe that's tongue in cheek. Maybe it's funny to him," Rouhier said. "That's all well and good. I find that to be a slap in the face to fans of the Washington Wizards. I find this to be -- again, as I said -- shameful and embarrassing. I don't know what this is. Here are my choices: Something that smarter people than me are trying to prove that they know better than basketball experts; or some other kind of cost-cutting cheap measure. Either way, it tells me that you are not committed to winning."

"You haven't been better than a four seed once, as you watch other teams lap you year in and year out," he went on. "Atlanta figured out a way to get good -- they were better than you were. Boston figured out a way to get good -- they're better than you are. So is Philadelphia now. Cleveland will always be as long as LeBron is there. But it's fine, because you keep your general manager in place, who's been here  as long as names like Danny Ainge, R.C. Buford and Pat Riley.

"'Which one of these is not like the other?' - Sesame Street asked us years ago. I know the answer. It's Ernie Grunfeld, whose lifetime .441 winning percentage as general manager of the Washington Wizards, 536-678 is shameful. Selling of first-round picks, making incorrect picks with different philosophies that range from year to year. Sometimes we're trying to win now, so we give up picks altogether. Other times we're rebuilding and end up with Jan Vesely. He deserves to lose his job. He's deserved to lose his job for some time. "

"He deserves credit for fixing the mistakes that he already made," Rouhier went on to say. "Our friend Thom Loverro has a great line about how he is an arsonist fireman. He looks up after putting out the fire that he started, wondering where the credit is for that. They are just good enough to be swept out and the world is passing them by."