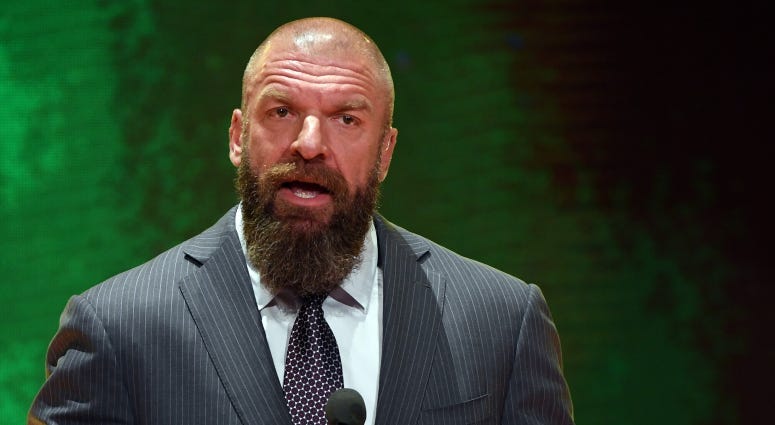 Maligned for years for being "fake," professional wrestling finally got its sporting dues this past weekend in the wake of a successful WrestleMania 36.

WrestleMania is the biggest wrestling night of the year, but it is indeed so much more than that. On par with the Super Bowl for the glitz, glamour, and number of sideshows that happen in the week preceding the main event, WrestleMania can attract hundreds of thousands of fans to a city.

The plan was for a one-day event at Raymond James Stadium in Tampa, Florida. In the fallout of the COVID-19 outbreak, WWE pulled the plug on the public crowd, switched it to a two-day format and moved the event to its indoor training facility in Orlando.

In doing so, Commissioner Vince McMahon, no doubt, left millions of dollars in tickets, concessions and merchandise on the table, but looked to cash in with a starved, global sports universe.

That's what success looks like during the COVID-19 health crisis, and it's a direction that other sports leagues could consider from a logistical standpoint.

How? The WWE committed to safety first. No fans were allowed in, creating an almost eerie silence to the show. Wrestlers were alone in a building the size of a high school gym, with only the announcers, officials and cameramen within six feet. Everything that wrestlers and the referees say is typically muted by the crowd noise, but it created some interesting opportunities for banter in the deafening silence.

In the name of safety, wrestlers were allowed to bow out from competing, which superstars like Roman Reigns and The Miz took. In addition, several wrestlers showed signs of illness in the days before the show (not necessarily the virus) and were dismissed for quarantine. Presumably, the WWE's efforts to control the environment before and during the show will pay off with no unexpected spread of COVID-19.

Other leagues can mimic this by moving to a similar pay-per-view model. Baseball, basketball or even football teams could play rivals in a single game or three-game series, as long as the elements are controlled in a similar way. Place players, coaches and trainers in quarantine for a month ahead of the game. Let any players who don't want to play opt-out.

Bring in celebrity alums to play in the game to help raise the spectacle of the event. Give players two weeks to prove they are clear of symptoms, then relegate them to a strictly controlled environment. After that, give teams two weeks to get in shape and remember how to play together. Sell the game or series to the public in a rivalry series that doesn't count towards any eventual season record.

Why? Do it for the fans. Paul Levesque, better known by his in-ring name of Triple H, is now a WWE executive, and explained the decision to proceed with the show in a recent appearance on ESPN's MMA Show with Ariel Helwani:

If you don't like that, do it for the players, many of whom are not millionaires and don't earn a paycheck unless they play. This is why the pay-per-view model works, because it doesn't count against the season, the contracts that are on the books, or the TV contracts that are in place. This is a separate opportunity for players to make money during an unplanned work stoppage, and any who don't feel compelled to do so can opt-out.

This model only works if the leagues can ensure that players, fans and other personnel can be protected from catching or spreading the virus. We may find in two weeks that someone within the WWE facility passed the virus to half of the roster, creating a nightmare scenario.

But if the WWE managed to pull this off, it would give fans something to look forward to. It would allow them to remain connected with the sports and players that they love at a time when everyone needs it.

And if professional wrestling, which relies heavily on the instantaneous reaction, or "pop" of the crowd, can carry off its biggest show without a single fan in attendance, then other leagues have no excuse not to try to get creative.